UPDATE 1-3-17: Well, the new year is here and the lights still are not operational at Croson and Belmont nor at Ryan and Northstar. The holidays, the sub-freezing temperatures and the recent rainy days have all conspired to keep the crews from hitting their target dates for the new traffic signals. The Burn will stay in touch with LoCo DOT and let you know when these two troublesome intersections finally get their lights.

According to Loudoun County Department of Transportation officials, the eagerly anticipated traffic signals at two significant south Ashburn intersections should be operational by the end of December, barring bad weather or other unexpected delays.

Drivers have noticed the stoplight work going on at the mammoth Northstar Boulevard and Ryan Road intersection, near the Brambleton Town Center. This current four-way stop is awkward to drive through at busy times, with long lines and lots of drivers who don’t wait their allotted turns. The Brambleton community is installing the new signals and hopes to have them up and working by the end of the month. 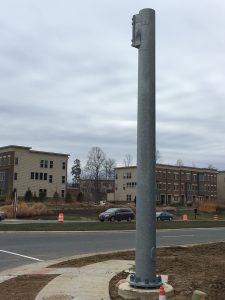 Meanwhile, LOCO DOT had hoped to have the lights working at Croson Lane and Belmont Ridge by today, but factors such as recent bad weather have pushed that deadline back a bit. The Devil’s Intersection, as we like to call it, is a major feeder for young drivers headed to nearby Briar Woods High School and the difficult left turn onto Belmont there has been the scene of more than a few accidents. Thankfully, the new signals should also be operating in the next two weeks or so.

Per Virginia DOT rules, once powered up, the lights must be set to “flashing yellow” for at least three days in order to make sure regular drivers through the area notice them and are aware of the impending change. 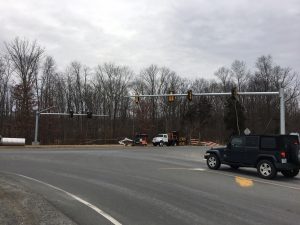 Next Post
REVIEW: FIRENZA PIZZA FIRES UP FOR ASHBURN

The road is being four-laned from Northstar to Beaverdam.

The oddly configured intersection will be made safer with traffic signals and crosswalks.