Social media has been on fire lately with Washington Redskins fans upset about how the team’s owners and administrators are dealing with QB Kirk Cousins and GM Scot McCloughan. Now, that online anger is manifesting in the real world — as protest marches are being planned for this Friday and Saturday at the Redskins Park training facility here in Ashburn.

Dubbed the “March on Ashburn,” the event is supposed to take place at 8 a.m. Friday and, to accommodate people’s work schedules, again at 8 a.m. on Saturday.

There aren’t many details online. The Facebook event page (here) just says: “Get together in front of Redskins Park to protest Bruce Allen highjacking our beloved franchise.” (Allen is the team president.) The event also bills itself as free and “kid friendly.”

As of this writing, 50 people have said they’re going with another 175 interested. But this story is just starting to pop in local media, so look for those numbers to grow. 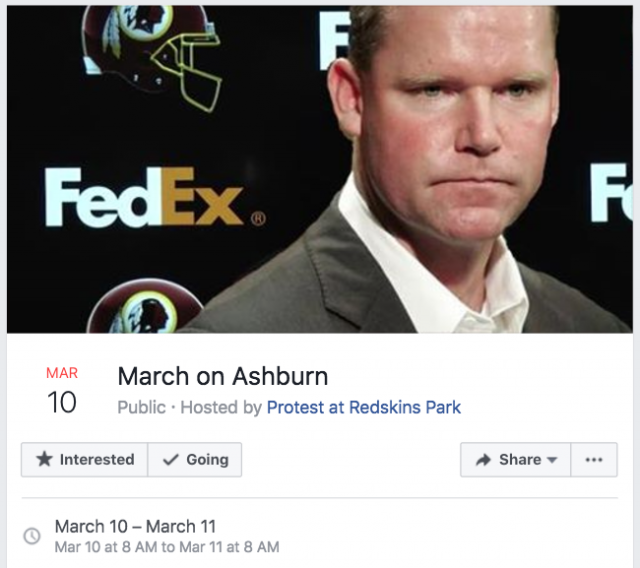 Next Post
IT’S GOING TO BE AN ALDI: SAFEWAY MYSTERY SOLVED

Redskins make it official — will retire name and logo

Warriors, Red Wolves and Redtails are some of the suggested replacement names.

One thought on ““MARCH ON ASHBURN” PLANNED FOR UPSET REDSKINS FANS”