Big changes could be coming to the Broadlands. 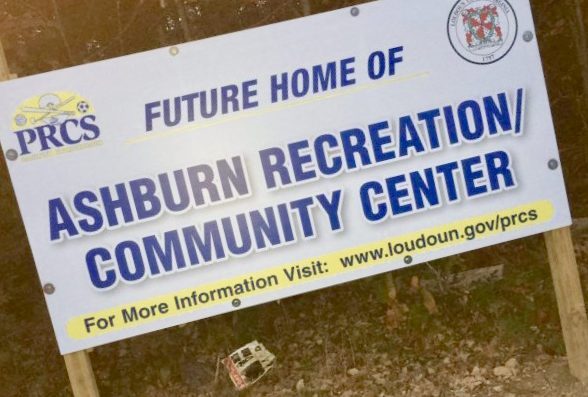 For several years now, Ashburn residents have been waiting for work to start on a community center of their own. Basketball courts, indoor swimming pool, meeting rooms, and more. Since at least 2016, a sign has stood along Truro Parish Drive in the Broadlands touting it as the future site of the community center.

Now comes word that the Ashburn Community Center may happen at a different location altogether. County leaders are working on a deal that would instead build the community center along Broadlands Boulevard just south of the Greenway. (See image above.) It would occupy a parcel of land sandwiched between Clyde’s Willow Creek Farm restaurant and the new Lidl grocery store that has just been built.

Initial plans for the community center called for 100,000-s.f. facility with meeting rooms, classrooms, a fitness center, a gymnasium and a running track. There would also be an aquatic center featuring a 50-meter swimming pool as well as a leisure pool and locker rooms. We’re told all these items are still in the works and, since the new parcel is a bit larger, there may even be room for some small soccer fields.

“This potential new site would be a huge win for our community — it’s a better location, can hold more amenities, and will save the county money and time,” County Supervisor Ron Meyer told The Burn. “The current site has been a nightmare. It’s too small, on a rocky hill, too close to houses, and hard to enter and exit. To make it fit, the board was informed last month the project would need an additional $15 million. That is why our office and Planning Commission Chairman Cliff Keirce got to work on finding an alternative site, and while we’re still working out the details, we believe we can get this deal done with the community’s support.”

Under the deal, Van Metre would reportedly swap the Broadlands Boulevard site for the Truro Parish site. There, they would build roughly 60 new single-family homes.