The grand opening is this Saturday afternoon and evening. 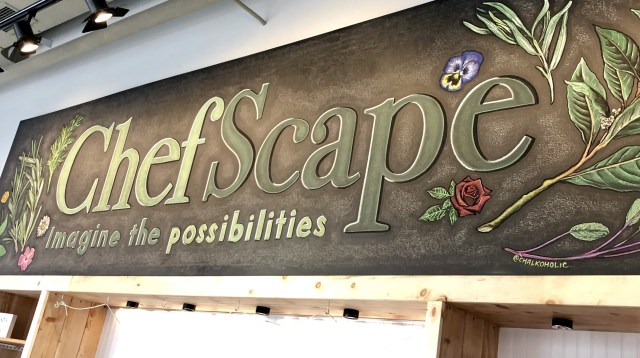 You’ve probably been hearing about ChefScape and the new Food Hall it’s opening at the Village of Leesburg. The grand opening is this Saturday, January 19. But the 16,000 s.f. ChefScape is a whole lot more than just a Food Hall.

Tag along as we walk you through the facility on this sneak peek tour.

The new Food Hall has gotten the most attention at ChefScape. It’s a large, open area featuring four kiosks where small local restaurant concepts can try out their latest ideas. There is plenty of seating, and a stage as well for music, karaoke and other events.

The fourth tenant was supposed to be Muggerz BBQ, but they stepped back so now the spot is going to feature a rotating array of different food outlets. First up: Rocoto — a Peruvian restaurant with a popular food truck in the area.

Immediately adjacent to the Food Hall is Bar Ahso. A full-service bar created by Jason Maddens, whose Ahso restaurant in Brambleton is one of LoCo’s hot spots on the dining scene.

Right at the front entrance, there is a small retail area that will offer a variety of prepared foods for sale that have been created by ChefScape’s culinary members.

Another large section of ChefScape is a dedicated event space. Filled with comfy furniture (still covered awaiting set up) and featuring some stadium style seating, the space can be used for private dinners, birthday parties, business meetings — really anything.

Right next to the event space is a kitchen where food can be prepared and staged for events in the main room. But it will also be used as a classroom for cooking classes, cupcake decorating birthday parties and the like. Picture Cookology at the Dulles Town Center mall and you’ve got the idea.

Probably the biggest part of ChefScape is the part guests won’t see much of. It’s the commercial kitchen that underpins the entire venue.

Dozens of local food creators — caterers, food trucks, candy makers, etc. — lease time and space in an amazing fully decked out commercial kitchen where they can store their goods, prepare and cook their dishes and run their food-based businesses without having to build and maintain their own separate kitchens elsewhere.

These are the food vendors who will fill the Food Hall, the ChefScape Market, and be featured at the many special events ChefScape has planned.

ChefScape will also be using its huge space to start hosting a farmers’ market.

Also, coming soon will be a monthly outdoor “street food” fest. They will close down the side street next to ChefScape and a variety of different food vendors will set up booths and tables and serve up their favorite dishes. The Farmer’s Market and the Street Food events are being done in partnership with Eat LoCo, which sponsors many of the farmers’ markets in the area.

Doors open at 11 a.m. Saturday for the ChefScape and Bar Ahso grand opening. There will be a member showcase with free samples from 1 to 5 p.m., followed by a ribbon cutting at 5:30. They have live music scheduled for the evening.

There will also be a live chalking demonstration from 6 to 8 p.m. by local artist Tonia Priolo who created most of the chalk signs around ChefScape.

WILD WOOD PIZZA COMING TO THE VILLAGE AT LEESBURG