Axe throwing. It’s the latest entertainment craze and yet another venue is planning a Loudoun County location.

Axes and O’s, a new, locally grown concept, is opening later this year in Sterling. It will reportedly be going into an 8,700 s.f. space on Ridgetop Circle. That’s off Nokes Boulevard, a little east of the Dulles Town Center shopping mall. The news was first reported by the Washington Business Journal.

At first blush, axe throwing sounds like a liability nightmare. Amateurs pick up heavy metal axes and heave them at a wooden target. Alcoholic beverages are often involved. But axe throwing businesses insist it’s all done safely — with barriers, rules, instructors and even limits on beverages. You can check out Axes and O’s Q&A on their website.

Axes and O’s — which will have 10 throwing lanes — reportedly hopes to open sometime in November. 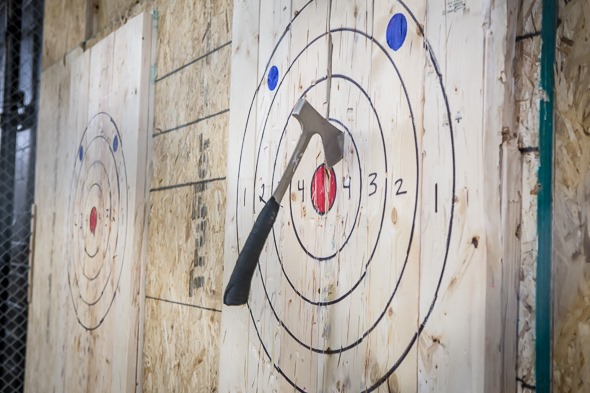 Axes & O's will open next weekend in Sterling.

Axes and O’s just waiting for green light to open

The new axe throwing facility will open soon in Sterling.