The viral craze over Popeye’s new chicken sandwich has made nationwide news — and it has rippled right into Loudoun County too. Local Popeye’s are sold out of the sandwiches — and some other items too — due to the long lines of eager customers that have been turning out each day. 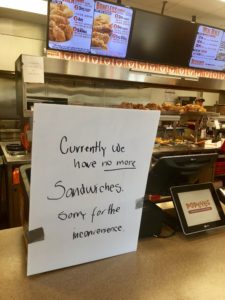 If you’ve been under a pop culture rock for the past week, you may have missed what’s going on. A few weeks ago, Popeye’s released its first chicken sandwich — regular and a spicy version too — that was available nationwide. Customers quickly started raving about it, saying it was better than Chick-Fil-A. This started a social media smackdown between to the two popular chains, and then Wendy’s jumped into the fray too. The New Yorker wrote an article about the chicken sandwich war and the story blew up big.

The next thing you know — long lines were forming at Popeye’s across the country. There were even reports of car accidents in crowded Popeye’s parking lots. 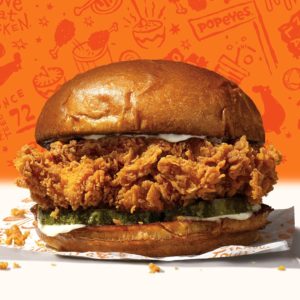 Here in Ashburn, The Burn went by Popeye’s at the Ashburn Village Shopping Center twice earlier this week and walked away after seeing lines out the door. This morning — Sunday — we decided to get a jump on the crowds and get there right when they opened. There was already a line waiting, and when the doors opened, staff released the bad news that they were entirely sold out of the new chicken sandwiches. They ran out yesterday around noon. One woman yelled. Others left disappointed. 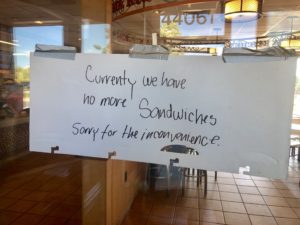 Signs were placed in the windows and in the store saying they were out of the sandwiches, along with no more French fries and no more boneless wings. Apparently, the larger than normal crowds mean the usual level of supplies they receive each week weren’t enough. 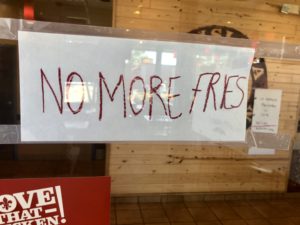 Staff said it’s this way at all the area Popeye’s locations. They expected to receive more chicken sandwiches on Wednesday. Calls to the Leesburg location confirmed they are out too. The phone at the Popeye’s at the Dulles Town Center food court rang busy.

Leesburg getting a new Popeyes restaurant

This will be the second location in the town for the popular fast-food chain.

The new restaurant will be serving up fried chicken and more via the drive-thru lane.