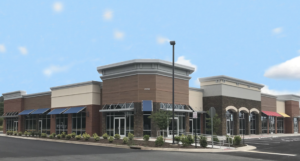 Signs are up at baddpizza, Burgerim in South Riding