Regulars turn out each week to try and advance to regional contests. 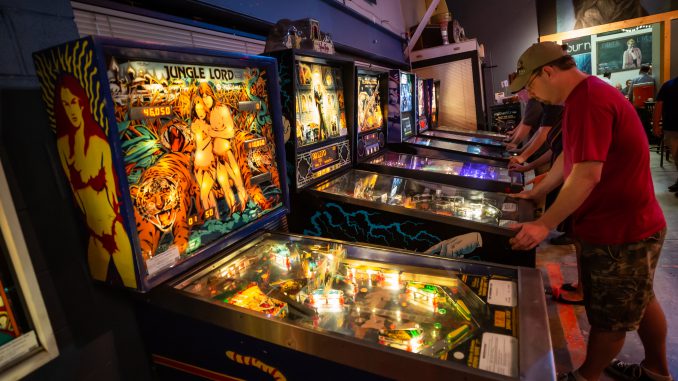 Who doesn’t love beer and pinball? For some — it’s the perfect combination and it’s available every day at Lost Rhino Brewing Co. in Ashburn. Now, a local competitive pinball league has formed there, with players advancing and competing in regional and national contests.

Ashburn Magazine explored this unusual local pastime in its most recent issue and we thought you might like to read it.

Be careful who you call a nerd.

That’s the lesson learned by data analyst Lindsey Galloway after she poked a little fun at a friend.

“My co-worker at the time was in a competitive pinball league, and I always teased him about being a nerd and a pinball wizard,” said Galloway, 44, who lives in Ashburn’s Carisbrooke neighborhood. “Then I finally came out and tried it. It was fun. It was embarrassingly fun.”

Galloway is now a formal member of the Silverball Sanctum, a local league that plays at Lost Rhino Brewing in Ashburn each week. That league is part of the Free State Pinball Association, or FSPA, an organization for pinball leagues around the Virginia-Maryland region founded in Baltimore in 1995.

“When you play in our league, you will get points that show up on a scoreboard and you will be ranked against players who play around the world,” said 27-year-old Edan Grossman, a senior league officer with the FSPA and the organizer of the local league. “At the end of the year, each state will have their own state championship. Whoever is No. 1 and No. 2 for each state — they get a chance to compete at the national event.”

Recent past North American championships have been held in Las Vegas, but the 2020 event will be in Denver. Eric Banker, 42, is a software engineer who lives in the Broadlands with his wife and son. He remembers playing a lot of pinball as a kid, but hadn’t touched a machine in ages. Then a couple of years ago, Lost Rhino added a few pinball games, and, as a regular there, Banker gave it a try.

“It re-energized that feeling I had as a kid,” he said.

For the rest of the story, including the two pinball machines Banker has in his home, why digital pinball will never fly and how to get involved yourself, click this link to head over to Ashburn Magazine.