Sleepbox can be used for a nap, as an office, or a quiet place to make a phone call. 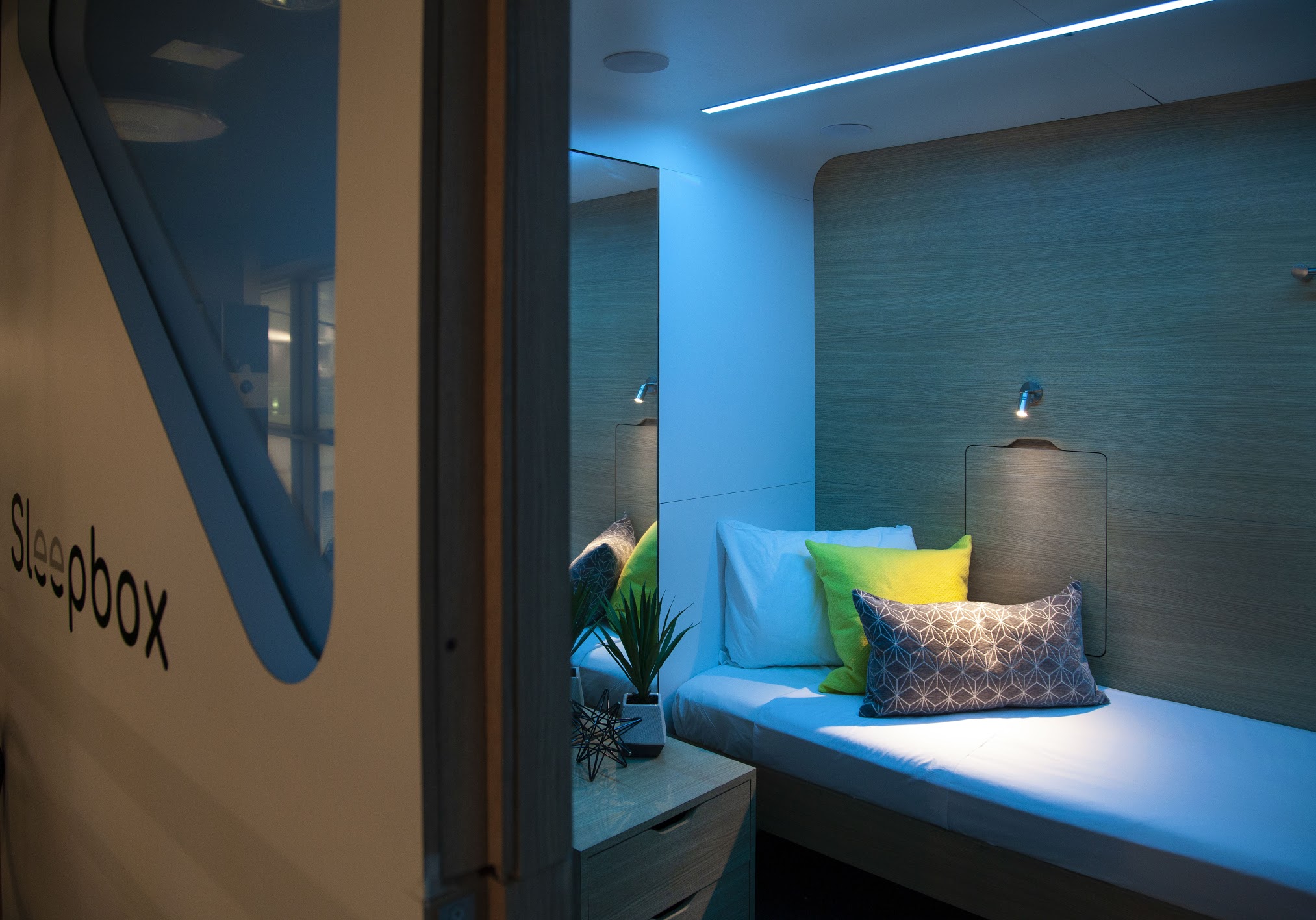 *The Burn is sharing this feature article from our partner publication Ashburn Magazine.

Imagine this scenario. You’ve driven to Dulles International Airport, parked in the long-term lot, checked your luggage, made your way through security, hopped a train and finally arrived at your gate — only to hear an announcement that your flight is delayed. Maybe it’s just a short delay. Maybe it’s a few hours. Maybe the duration is unknown.

What do you do? Head home? Find a bar to camp out in? Try to get comfortable in a waiting area? Now you have a new option at Dulles — a Sleepbox. Dulles International just southeast of Ashburn is on the frontline of this major new amenity that could soon be coming to airports across the country.

In April, Dulles proudly welcomed the first and only Sleepbox airport lounge in the United States. The name Sleepbox fits the minimalist product — the onsite concession consists of 16 stand-alone modular units, which patrons can rent by the hour to nap, recharge or use as an office to get some work done.

Sleepbox general manager Passion Martin said the micro-hotel, located post-security above the AeroTrain in Concourse A, gets a lot of attention.

“Passengers are fascinated — they stop to ask questions, take photos, or peek at one of the units.”

Through early December, Sleepbox had topped 4,000 bookings with an average stay of two to four hours.

Available in standard, compact or ADA-compliant variations, each single-occupancy unit provides a memory foam bed with clean sheets, a flip-down lap desk, a reading light and a strong Wi-Fi connection, plus a few frills like colorful mood lighting, Bluetooth speakers, and ports to charge electronics.

Sleepbox CEO Mikhail Krymov was an architect in Moscow when he was stranded overnight in an airport in France. “People were in misery, sleeping on the floor, and I wanted to solve that problem,” he said.

He helped design a prototype and took that concept to Boston in 2016 while studying as a research fellow at MIT. There he met and became business partners with COO Peter Chambers to co-found Sleepbox, which is based in Boston.

The duo brought Sleepbox to Dulles after winning a contract to provide a concessions nap lounge in the busy airport. Although it is the first airport Sleepbox in the United States, short-term sleep lounges have been a feature in airports in other countries for years.

“Sleepbox’s offering of quiet, private space post-security makes it a unique amenity for passengers beginning or ending their trip at the airport,” he said, noting that MWAA has received positive feedback from many passengers using the facility.

To learn more about what travelers have to say about Sleepbox, how much it costs and where you might find them in the future, read the rest of the article over at the Ashburn Magazine website here.