Parallel Wine & Whiskey Bar, a popular wine bistro in Ashburn’s Broadlands Village Center, found itself the center of social media outrage over the weekend after someone posted an image of a t-shirt that — up until recently — had been hanging on the wall of the restaurant.

“Drunk Wives Matter” appeared in white on the black t-shirt, one of several shirts that Parallel sells with catchphrases on them.

The phrase on this particular shirt was a play on the “Black Lives Matter” slogan that came to national attention in the wake of the Trayvon Martin shooting in 2012 and the subsequent acquittal of the shooter, George Zimmerman. 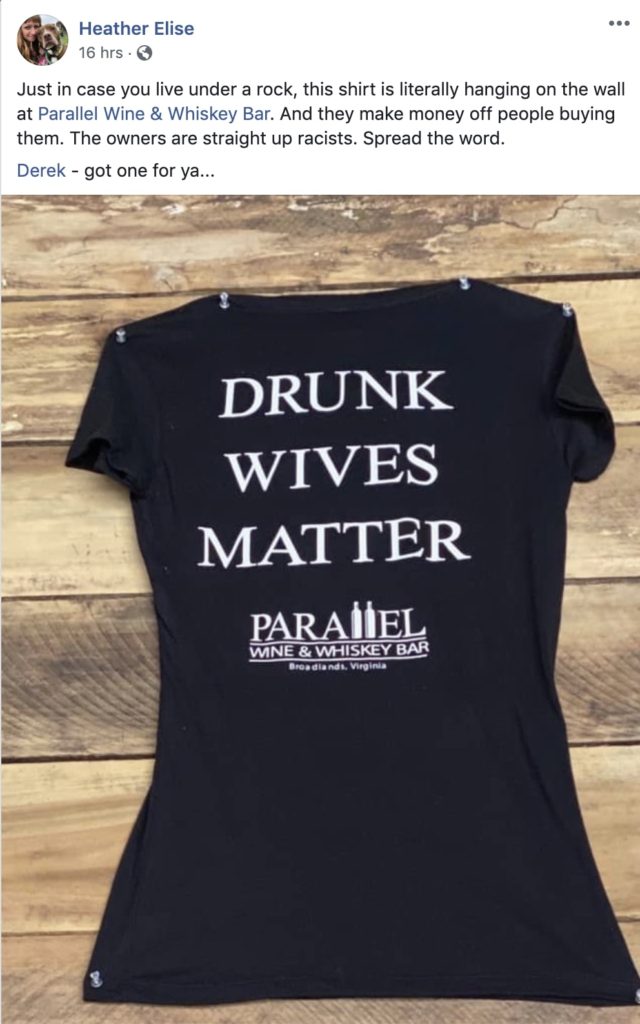 After the image of the t-shirt was posted on Sunday, social media in Loudoun was full of posts, comments and opinions about the t-shirt and the man behind Parallel — owner Jason Bursey. While many posts defended Bursey and said people were over-reacting, many others were outraged and angry. Soon other political and social comments Bursey has made on social media were circulating and adding fuel to the fire.

The Burn spoke with Bursey this morning about the shirt and what has happened over the weekend.

“I have several shirts that say other funny things as well — ‘Make Merlot Great Again’ — I play off things with no ill intent whatsoever,” Bursey said. “I’ve had that shirt for a year or a year and a half. I’m just been focused on my restaurant and food and trying to stay open. When the social climate changed over George Floyd, a buddy of mine who is half black … emailed me and said ‘I was on the patio over the weekend and happened to see that shirt. I feel with the social climate maybe now is not the best time to have that shirt up.’ I usually stand behind whatever I do, but I responded back and said, ‘This is one time I don’t disagree with you. You’re right and I’m going to take it down.’”

Bursey said he removed the shirt about a week ago.

According to Bursey, the original image was posted on Sunday by someone who has posted antagonistically about Bursey and Parallel in the past.

“She went onto every public platform I’ve been living on the past few months in Covid … and posted the picture of the t-shirt and put it out there calling me a racist, portraying it as if I put that shirt up to get attention off the Black Lives movement,” he said. “With the sensitivity of people, it’s easy to get them to jump. She’s out there trying to destroy me, and it’s horrible that everyone is biting without any knowledge of what’s actually going on.”

Bursey says that many of the people commenting and posting are not local — that there are now people from other states and even other countries jumping on the issue. Parallel’s star rating on Yelp has dropped half a star in the past 24 hours as more than two dozen people have left 1-star reviews, angry about the t-shirt.

“With Facebook and social media in general, people have a platform to do whatever they want,” Bursey said. “They have the ability to be positive, but they can also be Satanists and kill and destroy without any repercussions and come after a business like mine and my wife and my family, without even knowing me or having any knowledge of my business. They just jump on a bandwagon. It’s complete garbage.”

But some long time patrons are expressing dismay over the t-shirt and Bursey’s comments. The Burn spoke with Ashburn resident Wendell Smith, who said his wife loved Parallel and went there almost weekly with friends and family. This morning, Smith posted his thoughts on Facebook.

“Surely, the owner of Parallel Wine & Whiskey Bar … knows that he has African American patrons. My wife and her best friend tried to drag me to happy hour at least twice a week,” wrote Smith. “I am sure he must have seen us or some other dark faces. I think one could reasonably assume that his dumb joke printed on this t-shirt, or his stunningly ignorant Facebook posts would offend me and others, and yet, he still decides to move forward. I’m reminded of a few facts: this is America — with a few exceptions — you can say whatever you want (and I’m very glad that you’ve voiced your opinion, bruh!). But I also have the freedom to patronize any business that I want. I also have the freedom to educate my friends and neighbors about people in our community who think that an international human rights movement that advocates for the end of systemic racism, is a joke.”

Some people commenting on social media are asking Bursey to apologize. That does not appear to be happening anytime soon.

“I think they’re looking for an apology and that’s what I can’t stand most about the world today — that they can bully you and make you take a knee and apologize,” Bursey said. “I have responded sensitively to anyone who may have felt bothered by that shirt. That’s why I took it down, but I don’t apologize for the shirt and I don’t think I’m going to issue a public statement of apology. I think this is a hit job and I should be apologized to. I can’t believe that people who know me have come out against me and just jumped on the bandwagon.”

“My plan is to focus on my business. It’s what I do every day anyway — making Parallel great and being a part of our community. We are  a community family —we go to church, we work, we support our community and I hope they will continue to support us back,” said Bursey. “And they forget about Covid — and what is happening to our small businesses — and focus on this and come after me after I have done nothing but support our community and our guests for 10 years. Up until two weeks ago, everybody thought it was funny.”