Visitors to the Farmer’s Market at One Loudoun were surprised to see workmen nearby setting up what appeared to be a drive-in movie theater. Well, guess what? They weren’t wrong.

From what we are hearing, it sounds like a pop-up drive-in movie theater is in the works for a vacant parcel of land on the property. Crews were out at the site Friday and Saturday, working on the giant inflatable screen. The workers — who told passers-by they were setting up a drive-in theater — were also putting out numbers which would theoretically designate where cars will park.

Here is a still shot taken from a video on Twitter showing the screen at One Loudoun being inflated earlier this week. 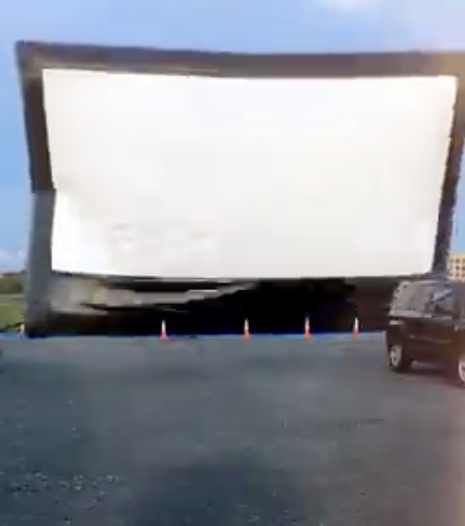 Any other details about the proposed drive-in at One Loudoun are still hush hush. The Burn reached out to officials at One Loudoun and the Alamo Drafthouse movie theater, but they had no comment yet. If they can pull this off, it will be a nice amenity for a pandemic weary community.

The women's clothing shop should be opening around the corner from Trader Joe's.