The species is listed as “threatened” in Virginia. 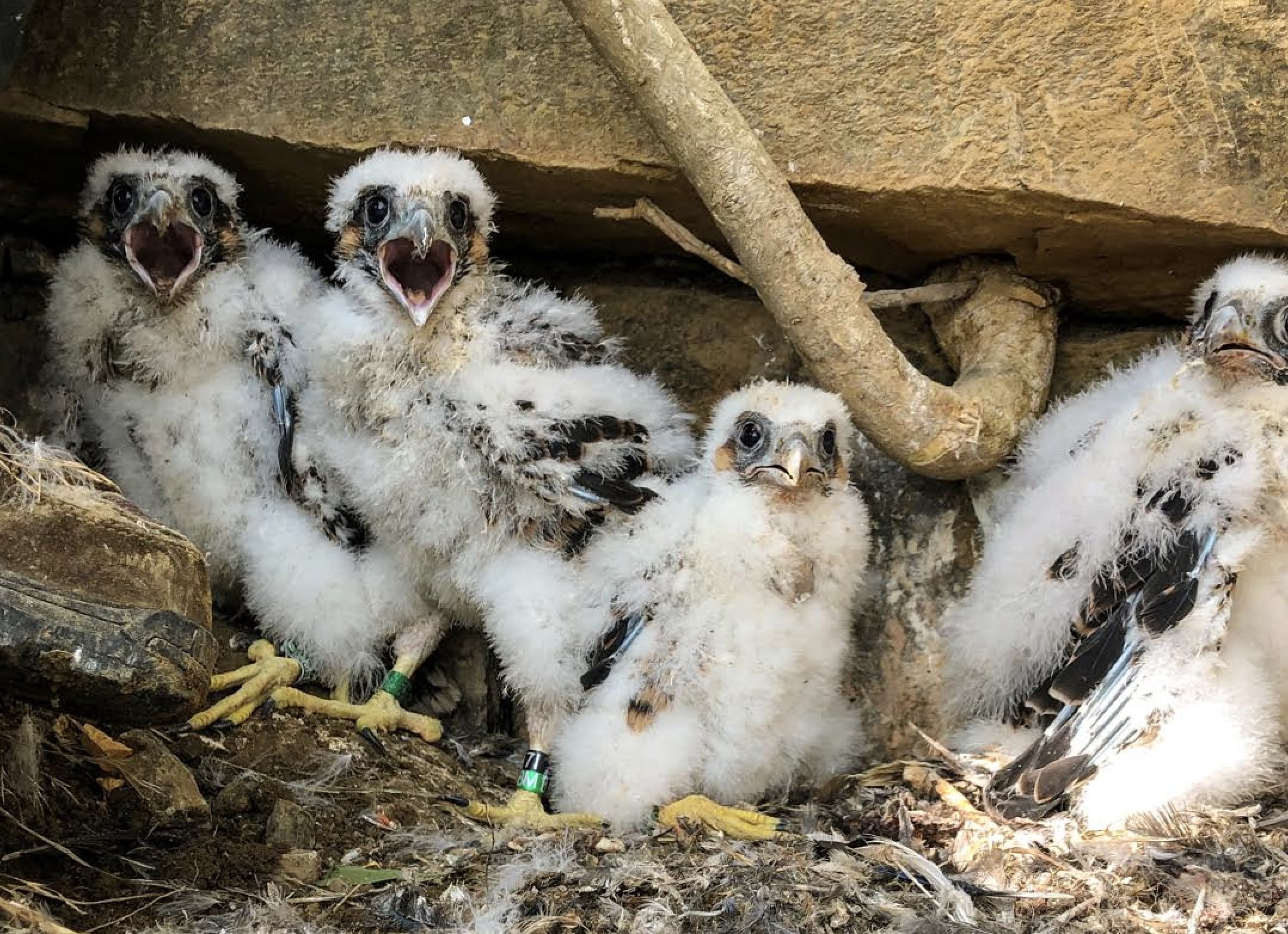 A narrow ledge 75 feet above the ground in a traprock quarry may sound like an inhospitable place to have and raise babies, but if you’re a peregrine falcon, it’s perfect. Last year, for the first time, a pair of falcons chose a ledge in the Luck Stone quarry just off Belmont Ridge Road in Ashburn for their home. There, the female laid four eggs, and the pair successfully raised three males and one female.

“They took my breath away” when he spotted them, said John Thompson, Luck’s regional operations manager. Peregrines typically nest on cliffs, ledges, skyscrapers, water towers, bridges and other tall structures, so the sides of a quarry are perfect habitats. “Quarries mimic natural cliff faces,” said Bryan D. Watts, director of the College of William & Mary’s Center for Conservation Biology. 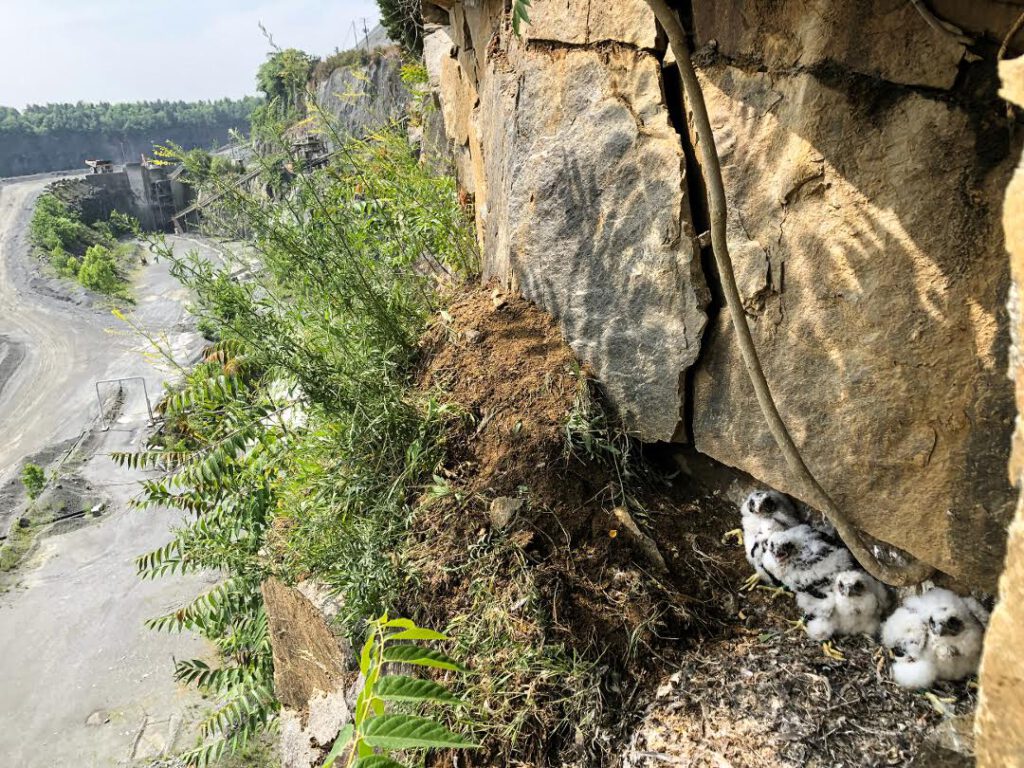 DOWN THE QUARRY WALL

In May 2019, Watts climbed down the quarry’s wall to see the nest up close and to band the chicks for further study.  He and an associate, ecologist Alan Williams, used climbers’ gear and rappelled down the sheer rock walls to the nest — also known as an “aerie.”

The scientists put each chick in a pet carrier and hung it on a sling attached to the wall. They banded the birds and took measurements. Then they returned the birds to the nest and climbed back to the top of the quarry. Job done. Further monitoring of the fledglings at Luck Stone was done from a distance with a long-range camera over several visits.

Scientists band birds in hopes there will be re-sightings. This allows them to study the birds’ migration, demographics and other factors. Watts partners with the Virginia Department of Wildlife Resources, the National Park Service and other organizations and private companies to help track the banded birds. Having Luck Stone as a partner is a boon to their studies. 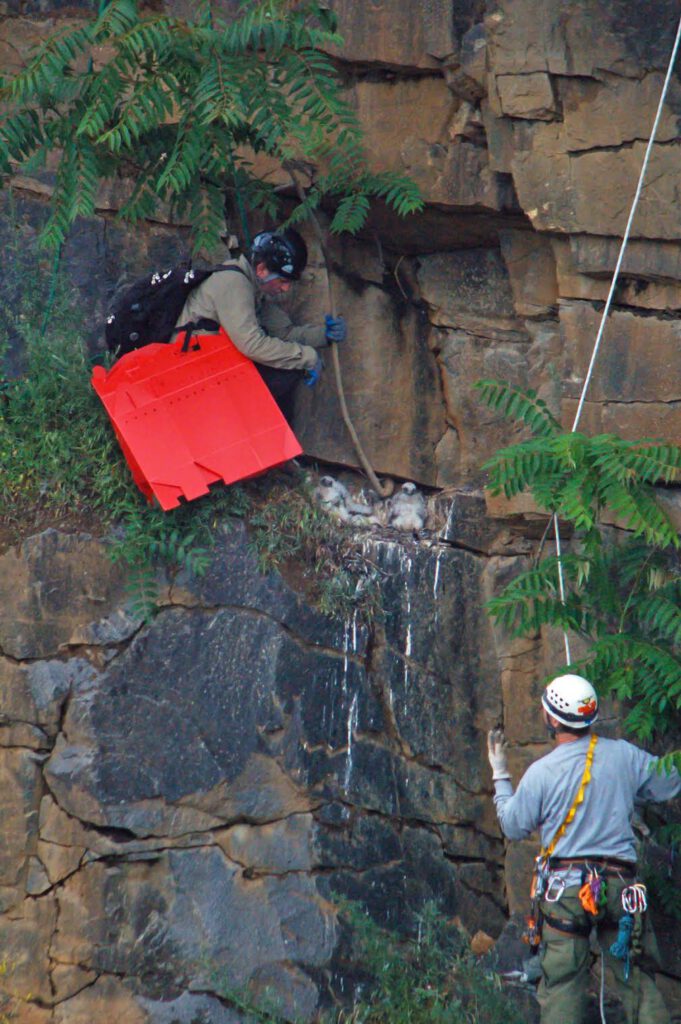 The quarry’s depth ranges from 50 feet to approximately 250 feet, and Luck mines diabase, a fine-grained rock used in concrete and asphalt. The nest was on a perimeter wall — in an area that will not be mined in the foreseeable future, according to quarry managers.

“They will likely play a significant role in future conservation efforts in Virginia and throughout the southern Appalachians,” Watts said. “We are very fortunate to have Luck Stone as a conservation partner for peregrine recovery.”

Peregrine populations declined worldwide in the mid-1900s, which experts attribute to the pesticide DDT. By the early 1960s, peregrines were believed to be done as a breeding species in Virginia due to the population drops. “Egg-shell thinning, egg breakage, and hatching failure have all been attributed to elevated contaminant levels in females,” Watts said. The tide started to turn in 1970, when the U.S. Fish and Wildlife Service listed the birds as endangered and, in 1972, the Environmental Protection Agency restricted the use of DDTs.

In 1978, scientists started restoration efforts in the Virginia’s coastal plain and eventually in the mountain regions.  Between 1975 and 1993, they released over 430 captive-reared falcons in the Mid-Atlantic and populations have risen steadily since. 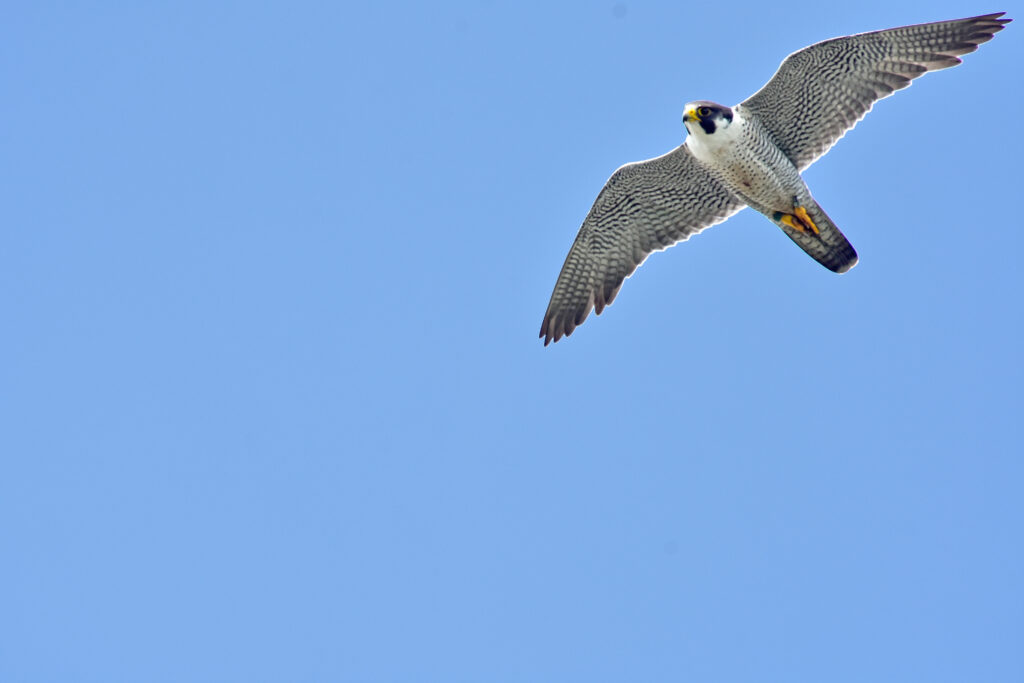 Over the last three decades, 95 percent of breeding activity in Virginia has occurred in the coastal plain region along the state’s eastern shoreline. Watts’ team counted 30 breeding pairs statewide in 2019, which included two in Northern Virginia — the pair at Luck Stone and a pair in Reston. This was the third highest population recorded. The 61 young produced in 2019 was the most productive in Virginia’s history. This year, the team once again confirmed 30 breeding pairs nesting in the state. “The population size is now around the estimated population size in the pre-DDT era,” Watts said.

Since the DDT ban, Virginia’s coastal populations have recovered more quickly than in other areas.  While the falcons were removed from the federal endangered species list in 1999, Virginia still lists peregrines as “threatened” at the state level.

To read more about the peregrine falcons at Ashburn’s Luck Stone Quarry, including how park service teams hand feed some chicks, the joy when falcons were discovered in Ashburn again this year and other fascinating facts about these birds, click here for the rest of the story over at the Ashburn Magazine website.