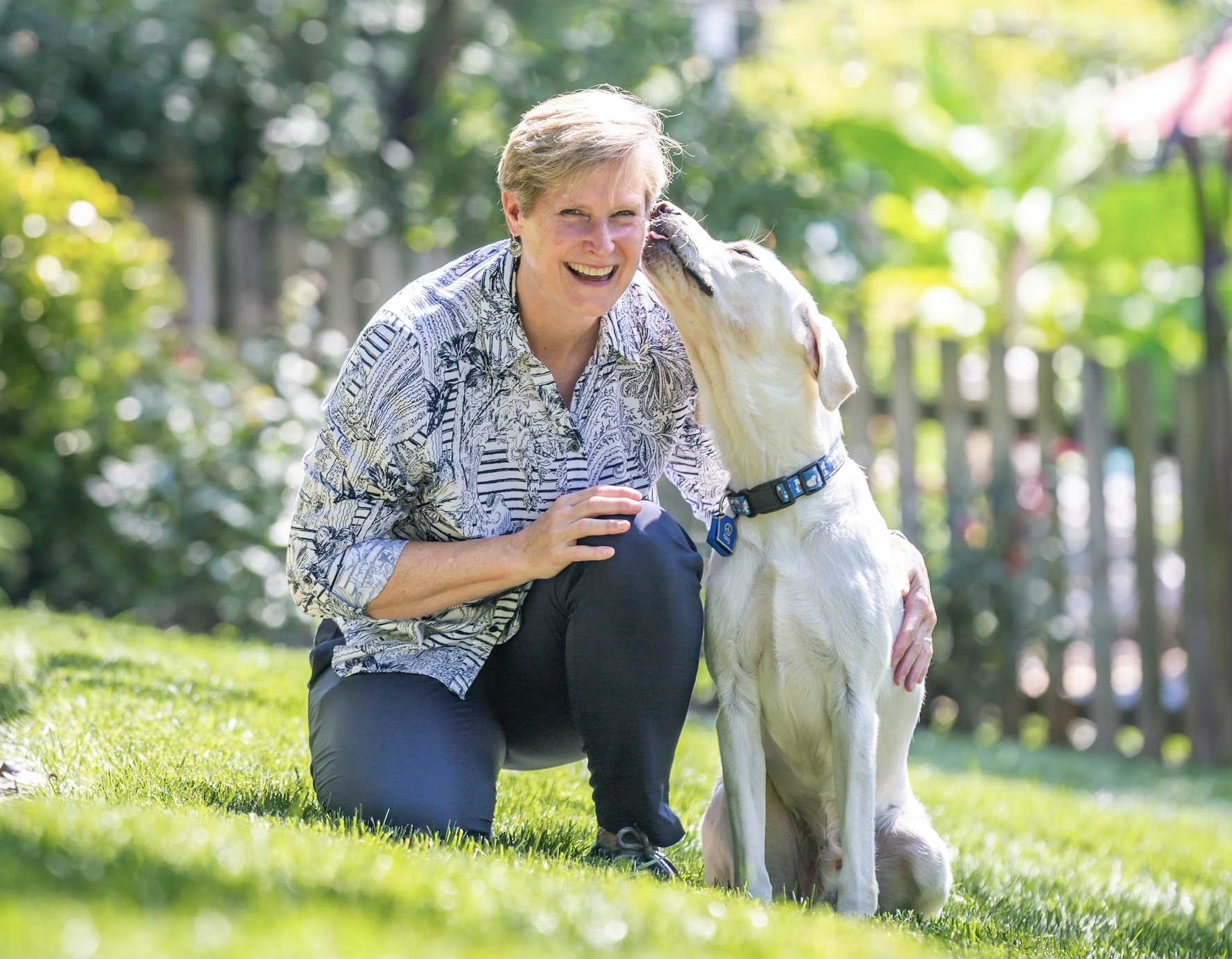 PUPPY WITH A PURPOSE

The handful of dog treats in her coat pocket made Heidi Cummings’ heart crumble on Valentine’s Day this year. She scooped some beef-flavored nuggets out with her car keys as she prepared to drive home to Virginia, and the tears started to fall.

“I cried all the way home,” Cummings said.

The Ashburn Farm resident had just left a part of her heart in Medford, N.Y., in the form of a playful Labrador/golden retriever mix named Auckland. Cummings had loved and nurtured Auckland for 20 months in her Ashburn home — knowing that the bond was only temporary. That’s because Cummings, 58, was a volunteer puppy raiser for Canine Companions for Independence, an organization devoted to breeding and training service dogs to aid children, adults and veterans with disabilities.

“I knew from the start that this day would come, but I was able to snap out of it when I remembered my primary objective — to help Auckland bring mobility, independence and joy to a person with a disability,” she said.

Since 1975, Canine Companions, the largest nonprofit provider of assistance dogs in the United States, has provided service dogs free of charge to recipients.

The organization’s professional trainers teach dogs to respond to more than 40 advanced commands, such as opening and closing doors, pulling wheelchairs, retrieving items, toggling light switches, and alerting to important sounds or names. Dogs that master this training are matched with a recipient, who then spends two weeks at the center to participate in team training. Canine Companions retains ownership of the dogs, and recipients are thereafter referred to as graduates. One such graduate is Ashburn Farm resident Mike Royer, who was teamed with a Canine Companions service dog named Karen in 2014. Karen helps Royer, who has hearing issues, navigate through his days as a husband and father of three children as well as an employee with the Department of Homeland Security.

“Karen is trained to alert me to specific sounds, such as a timer, my name, a knock on the front door and my phone alarm,” Royer said. “When my tinnitus is at its worst, I rely on Karen to determine whether there is an actual sound or event in my surroundings that needs my immediate attention.”

For Cummings, raising a puppy for the organization was a lifelong dream. She grew up in Santa Rosa, Calif., where Canine Companions is based, and remembers seeing graduates of the program interacting with their dogs.

“I’ve always valued my own fitness and mobility, so I held on to the idea that one day I would help someone gain mobility by raising a service dog,” said Cummings, who applied to the program after retiring from the FBI.

Puppy raisers devote considerable time to socializing the puppies, including taking them on public transportation or to work, sports events, restaurants, shopping, and anywhere they are exposed to a variety of people, situations, sights, and sounds.

Raisers attend puppy classes twice a month, where they practice basic commands. Puppies must remain on leash when away from home, and when in the yellow “work” vest they must obey commands, show restraint and not interact with people or other dogs unless commanded. Puppies are also crated when they sleep at night.

“Wild from the start,” is how Cummings described Auckland. “Everything he did had an exclamation point at the end, from eating fast to exploring, licking, and tasting everything in his path – you never knew what to expect from him in puppy class.”

Raising and training Auckland was a family affair. Cummings’ husband, Terry, and grown children, Colin and Erin, did their part. Knowing that the lovable dog wasn’t really theirs and had a higher purpose took some getting used to, Erin said.

“I knew I couldn’t think of Auckland as a pet,” added Erin, who sometimes took Auckland with her to classes at Georgetown as part of his training. “He was always perfect while he worked.” John Bentzinger, a spokesperson for Canine Companions, said only about half the dogs make it through the program successfully. Those that don’t pass are available for adoption, with the puppy raiser given first option.

“Volunteer puppy raisers are really the backbone of our organization, and we couldn’t serve without them,” he added. “The ones that graduate really are the cream of the crop.”

After returning from New York in February, Cummings rounded up Auckland’s small toys, bittersweet reminders found tucked away in corners and hidden under furniture. She found herself thinking about Auckland often, especially when she received occasional photos and updates. She hopes to raise another puppy for the program and was looking forward to attending Auckland’s graduation ceremony to witness the joy he would bring to his recipient.

And if Auckland didn’t graduate for some reason? Don’t worry — he would always have a forever home with Cummings. “I haven’t put the crate away yet,” she said. “Just in case.”

BUT WAIT! THERE’S MORE! This isn’t the end of the story. Yes, this is a classic bait-and-switch, but there is a heartwarming epilogue to the story of Heidi and Auckland, but you have to hop over to the Ashburn Magazine site to see it. Click here to read the rest of Auckland’s story.