The community went from a quiet farming village to a bustling, high-tech suburb. 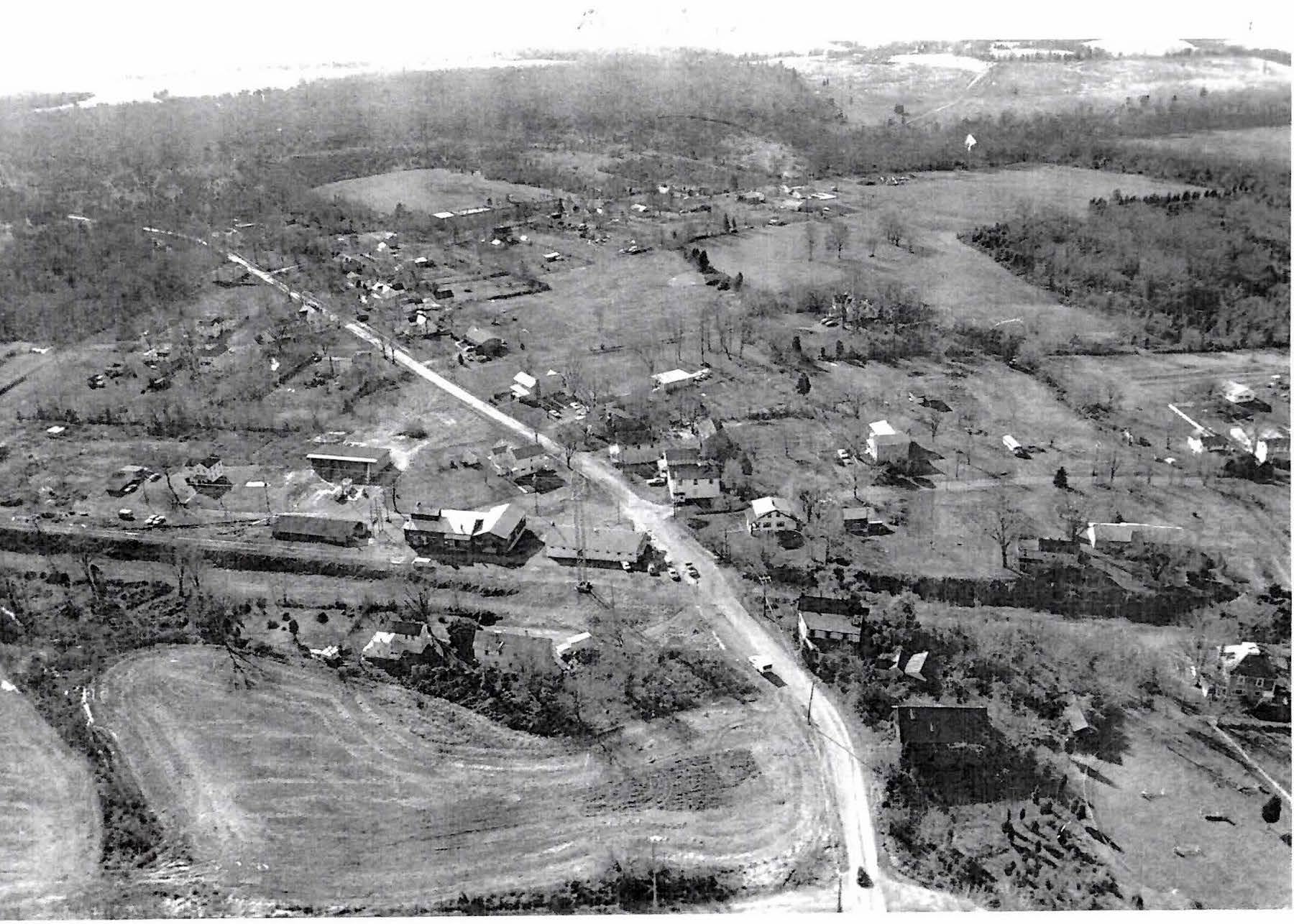 “I remember everything being quiet — everything except the birds and the insects.” That’s how lifelong Ashburn resident Randy Poland describes growing up here in the 1950s and 1960s. It was the quintessential rural life — dairy farms, gravel roads, a general store, a single brick school.

But in 1985, when Poland turned 30, Ashburn also reached a crossroads. That’s when county leaders approved a new development that would fundamentally change this tiny dot on the map forever. The development was called Ashburn Village — a neighborhood filled with 5,000 homes, dozens of new roads, a supermarket and shopping center and much more. A headline that year in the Washington Post read, “Neighbors Uneasy About Impact of Ashburn Project in Loudoun.” Uneasy to say the least. The green light for Ashburn Village dominated conversations at dinner tables, church suppers and at the local store. Change was coming.

In October of this year, three historic buildings along Ashburn Road were torn down to make way for a new residential development. One of those buildings was Randy Poland’s childhood home — showing that the change that started 35 years ago with that fateful vote is still occurring today.

“We’re not the least bit ambivalent about it. We’re dead set against it.” That’s what Ashburn resident Robert Gullo told the Post in the December 1985 newspaper story about Ashburn Village. Gullo had moved his family from Annandale because he liked the open spaces and country living. “Hell, I commute an hour and a half each day just to live here.” Gullo and those on his side of the debate loved the rural lifestyle. They could work in Washington or the nearby suburbs dense with office buildings, then head up Route 7 and travel back in time — past the quickly growing communities in Fairfax and the new neighborhoods crossing the county line into Sterling — into the country that still looked much as it had a century before.

Another one of the locals quoted in the Post article was Sterling activist Stanwyn Shetler. Shetler lived in Loudoun County until his death in 2017. His daughter, Lara Shetler, says her father was a life-long environmentalist who was frustrated with how Ashburn’s green spaces were disappearing — something local residents still complain about. “I think dad has always known that growth was inevitable, especially in this area, but he strove for … growth and nature to [go hand in hand],” Lara Shetler said. “The developers come in and completely bulldoze an area down. They don’t save any of the trees, or any of the little habitats that might have been unique to the area. And then they put some trees back in, and they might not even be trees appropriate to the area.”

Back then, Partlow’s Store was pretty much the only shopping in Ashburn. That’s the building next to the W&OD Trail where Carolina Brothers BBQ is today. Locals called it the “Ashburn Mall” because you could buy more than just your staple groceries. You could also shop for shoes, boots and other essentials.

Cathy Cox grew up in Ashburn as well, right along Ashburn Road. She says Partlow’s was more than just a store — it was a hub of the community. “Calvin and Ernestine Partlow … helped people out the best they could in any way possible,” Cox said. “The store had a variety of everything. Calvin butchered meat for his deli section along with having shelves stocked from foods to hardware supplies. Gas, air and kerosene were also available. The Partlows were well respected in our little town.”

Community traditions stretched back generations — the annual Ham & Oyster Dinner at the Ashburn fire house, the Turkey Shoot contest, the Fireman’s Parade & Carnival. Area churches had events called “homecomings” — potluck dinners where every family tried to outdo the next to see how much food they could bring.

And there was a sense of community spirit. That everyone was in it together. “If there was a death in the family, there would be more food at your home in a day than you could eat all year,” Poland said. He recalls a blizzard that once swept in, leaving Ashburn Road in deep drifts. Local men dug out Ashburn Road all the way north to Route 7 so the milk trucks could get out. “It was such a small community, we had to count on each other for help.”

This is what Ashburn Village threatened. How could a tiny, tight-knit community of 200 people absorb 5,000 new homes and 5,000 new families, along with new stores and roads and businesses without something — everything — changing? They answer is they couldn’t — and they knew it.

But the rolling hills and the corner store were only half of the picture of Ashburn in the mid-1980s. There was another side as well — one that led some people to hope Ashburn Village would bring new life to a community that many felt had been dying for years. The red clay soil in Ashburn had never been great for farming crops.  Locals say it didn’t grow much, but it produced enough for dairy cattle to munch on. Indeed, dairy had been the mainstay of the local economy since the 1800s. But by 1985, many of the local farms had shut down and were vacant. “Farmlands were being bought out for development. Dulles Airport took out hundreds of acres, and that was the start of it all. That is why so many of us left Loudoun County and moved ‘over the mountain,’ as we say,” said Cox, who moved for a time to Clarke County with her family.

Indeed, older residents were dying and others were moving away, and there just weren’t younger families coming in. During this time, Tillett’s Auction Barn — which still stands off Belmont Ridge Road — was busier than ever. “One of the big things at that time was farm auctions — families getting rid of their stuff. Most of the farms had sold out or were getting ready to sell out,” Poland said.

And for the residents who did live here, things weren’t always easy. Roads were often gravel and filled with potholes. Homes were on septic tanks. Ashburn Village came with a promise from the developers to bring sewers to area homes and new, wider paved roads to the community — something Ashburn may not have merited otherwise. The Shetler family lived in the Sugarland Run neighborhood in Sterling, and Lara Shetler attended Broad Run High School. “Driving to the high school or taking the bus — it was a potholed back road,” she recalled. “It was paved, but it was more gravel than pavement.”

For real shopping — supermarkets, clothing shops, record stores — locals had to go to Herndon or Leesburg. Same if they wanted to cool off in a swimming pool or see a movie. “There was nothing between Sugarland Run and Leesburg. It was just wide open. They had a light at Route 28, and it was a flashing light,” Lara Shetler said. “If you wanted to go to a mall you went to Tysons or Fair Oaks. There was nothing close by.”

Sure, Ashburn Village brought the promise of change — but at least some of that change was something many in Ashburn desired. “I guess I may be getting convinced it will be for the better,” Ashburn resident Francis Costello said in the 1985 newspaper article. “Things certainly are at a standstill now.” And to this end, Poland says there wasn’t any serious movement to try to stop Ashburn Village. “I think a lot of people just felt it was inevitable. They saw Sterling Park coming in and Sugarland Run and Cascades. It was just moving in this direction,” he said. “There wasn’t anybody that lived in Ashburn that held enough power politically to do anything about it.”

When change came to Ashburn, it came quickly. To find out what happened when the community started to grow, plus more archival photographs, read the rest of Ashburn Magazine’s story “Crossroads” by clicking here.

Loudoun restaurants team up to try and survive pandemic