Pickleball growing in popularity around the region

Primetime for Pickleball
By Jill Devine

When retired IBM executive Dave Bauer moved from his long-time Fairfax City home to Ashburn’s Ashby Ponds in December 2016, he wanted to stay active and make friends. An invitation from another resident to play pickleball, a sport that combines elements of tennis, ping pong and badminton, delivered more friends, fun and fitness than he ever expected. 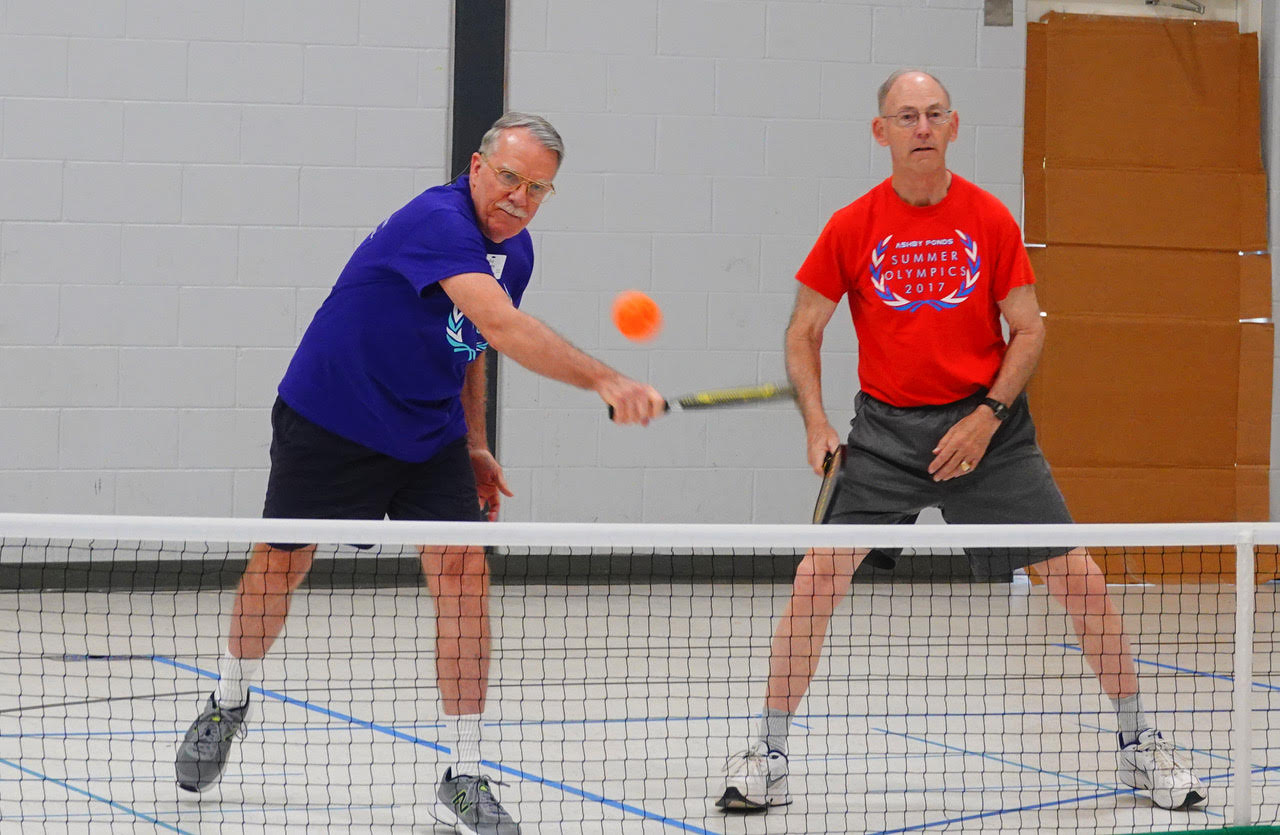 If you haven’t tried pickleball yet, take a number and get in line. According to the Sports and Fitness Industry Association, pickleball is one of the fastest growing sports in America, with more than 3.3 million players nationwide. The game, played on a badminton-size court using lightweight paddles and plastic hollow balls, was once considered primarily for older adults, but it has recently skyrocketed in popularity with younger players as well.

“Interest in pickleball has been unprecedented in recent years,” said Justin Maloof. He’s the executive director for USA Pickleball, a national governing body for the sport that is working toward getting pickleball recognized as an Olympic sport. The organization has seen its membership double since 2017 to roughly 40,000 players.

Pickleball was invented in 1965 by three friends — Joel Pritchard, Bill Bell and Barney McCallum — on Bainbridge Island, off the coast of Seattle. While on vacation, the men sawed off some wooden paddles and sent their kids to a badminton court with old wiffle balls to keep them busy.

When the kids didn’t return because they were too busy playing, the adults went to find them and got caught up in the game as well. The group made up rules as they went along. Not long after, they packaged and marketed the highly addictive game, with one of the founders claiming it was named after Pickles, the family dog that kept running away with the ball.

At Ashby Ponds, Bauer — who used to coach and teach tennis — made fast friends with fellow residents Lou Rodriguez, a retired school math teacher from New Jersey, and Roy Murphy, a former U.S. Navy officer and aerospace engineer. Now, the trio plays pickleball together every chance they have.

“The three of us are like-minded and have really melded,” Rodriguez said.

The sport is becoming so popular among all age groups that last year, a new facility called Pickleballerz opened in Chantilly, just 20 minutes from Ashburn. The climate-controlled, indoor venue has six regulation-sized courts and offers clinics, special events and programs for kids. The owners say it’s the only facility with indoor dedicated pickleball courts in the Mid-Atlantic.

Bauer agrees, noting that pickleball has great aerobic benefits and is easier on the joints than tennis. It’s also highly portable, with all the necessary equipment — including the net — fitting into a carry bag.

“It is easy for a pickleball beginner to advance to a playable level fairly quickly,” he added. “The game delivers enough turns and moves that when you walk away … you might need a day to recover.”

Around Ashburn, pickleball aficionados often play at community tennis courts that can be modified for pickleball. Meanwhile, the new 15,000-square-foot Ashburn Senior Center under construction on Marblehead Drive will have dedicated pickleball courts. It’s on track to open this fall.

To find out how the Ashby Pond pickleballers convinced the facility’s managers to build them a new court, and to see the basic rules of Pickleball and a diagram of a court, click here to head over to Ashburn Magazine website for the rest of the story.

One thought on “Pickleball growing in popularity around the region”