The long ago note has led to emotional old memories and the making of new friends. 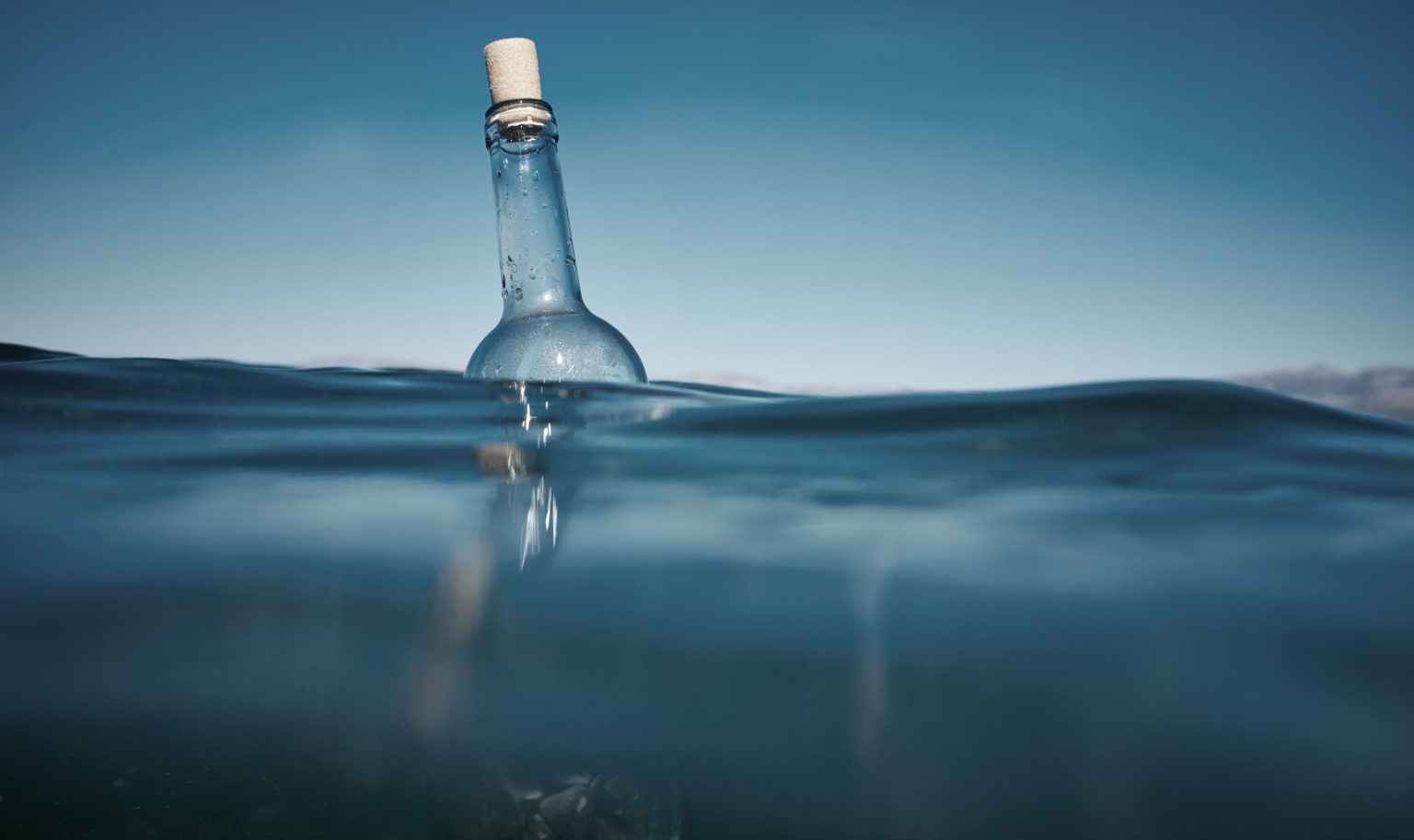 MESSAGE IN A BOTTLE
By Chris Wadsworth

For Liz Schnelzer, it was a magical time. Summers on Fire Island, N.Y., staying at her family’s cottage in the village of Saltaire. Days were spent walking and biking up and down the long boardwalks, sailing in the sun-dappled Great South Bay or splashing in the ocean waves.

But one particular day stands out in Schnelzer’s mind. It was the summer of 1982. She was a 13-year-old, swimming with her cousins, Emily and Susanna. The girls were floating and body surfing in the cool water in front of the cottage, chatting about all the typical things teens talk about, when they spotted something glinting in the sunlight beyond where the waves were breaking. “We swam out for it,” Schnelzer said. “I vaguely remember racing to be the first to reach the object. We were all pretty excited when we got to it and discovered it was a green glass wine bottle … and inside, there was a message.”

The girls hurried back to shore, dried their hands on their beach towels, kneeled in the warm sand and carefully opened the bottle. Out came a note that read, “Hi my nam [sic] is Robert Kane. If anybody finds this bottle write to Robert Kane 141 Great River New York.” The note writer had originally written “Bobby” but crossed it out for the more formal “Robert.” “We could tell it was a kid because of the cute crayon drawing on the back,” Schnelzer said.

A kid named Bobby Kane had put a note in a bottle and thrown it into the sea — and it would take Schnelzer, now a clinical social worker, wife and mother living in the Broadlands, nearly four decades to get to the bottom of a niggling mystery that never quite left her mind.

Schnelzer’s first attempt to find Bobby Kane came that day in 1982. The Trixie Belden mystery fan and her cousins ran up the wooden beach stairs and across the dunes, shouting to Schnelzer’s mother about the note they had found. The “Great River” mentioned in the note is across the Great South Bay from Fire Island. The excited girls and Schnelzer’s equally excited mom whipped out the local phone book and tried looking up all the “Kane” listings. But Bobby Kane hadn’t included a street name, and none of the Kanes in the white pages had a house number of 141. “We were so deflated,” Schnelzer recalled. “Finding a message in a bottle must be a once-in-a-lifetime treat. And we felt responsible for letting Bobby know his message had been found.”

But in those pre-internet days, options were limited. The mysterious note was slipped into a book and, when summer came to an end, it slipped from Schnelzer’s mind. Three years later, when Schnelzer was 16, she was cleaning her room, and the note slipped out of the book where it had been tucked away. In the moment, Schnelzer forgot that she didn’t have an address for Bobby Kane, and she sat down and wrote a two-page letter to the boy. “Hi! I hope you get this message! Several years ago, you left a message in a bottle and threw it into the ocean,” she wrote, and went on to relay the whole story and how marvelous the whole adventure was. But quickly, Schnelzer realized she still didn’t have an address for Bobby Kane, so the letter got folded up and stuck in a desk drawer along with the original note.

Flash forward to 2020 — a year unlike any other. Schnelzer, like everyone else in Ashburn, found herself spending a lot more time at home. She decided to do a little “COVID cleaning,” as she called it, and happened to pull out a bin containing the contents of her old desk from her childhood home. “I found the letter I wrote to Bobby in 1985 as well as Bobby’s original note,” Schnelzer said. “I thought, ‘Hmm, it would probably be a lot easier to find him now in the era of social media and the internet. But would that be creepy? Would he think it was some weird phishing scam?’”

So Schnelzer reached out to friends on Facebook and elsewhere and asked their advice. The response was nearly unanimous. “Do it,” said several people. “Not creepy at all,” others chimed in. “A person sends a message in a bottle because they want to have it found,” added another. Thus with the help of some friends and resources available today online, Schnelzer tracked down a likely phone number for the one and only Bobby Kane. “I took a deep breath and dialed his number.”

Three hundred miles away, in West Islip, N.Y., Bobby Kane answered. “Of course, I was skeptical at first,” said Kane, 45, a mortgage broker and licensed boat captain with a wife and little girl. “But I remember the whole thing. I remember the day. I remember my mom and dad and being out on the boat. I remember putting the note in the bottle and going out in the inlet and throwing it out. After two minutes, I realized — how would anybody else know that?”

Schnelzer sent Kane a photo of the original note, and hesitation and nervousness were replaced with excitement as the two began to share more and more details of the bottle, their childhoods and their shared love of the water. Email addresses were exchanged, connections made on social media and a burgeoning friendship was born. The duo determined that Kane — who would have been about 7 or 8 years old at the time — probably tossed the bottle in the waters of the Fire Island Inlet. From there, it flowed west and south around the western end of Fire Island and out into the Atlantic Ocean where it hugged the coast and was found by the girls off Saltaire’s beach. The bottle’s journey would have been roughly five to 10 miles.

At one point, in the mid-1980s, Kane thought his note had been answered when he received a response from a girl living in Great Britain. It turns out his mom hadn’t wanted him to be disappointed, so his parents arranged for the daughter of a friend to write to him. Years later, they told him the truth. “They had me going for a while,” Kane said with a laugh.

But wait! The story doesn’t end there! Click here and head over to the Ashburn Magazine website to read the rest of “Message in a Bottle” and learn why rediscovering the long ago note was emotional for both Kane and Schnelzer, and hear how these two new friends are making plans to meet in person.

New At Home store in Leesburg is officially open