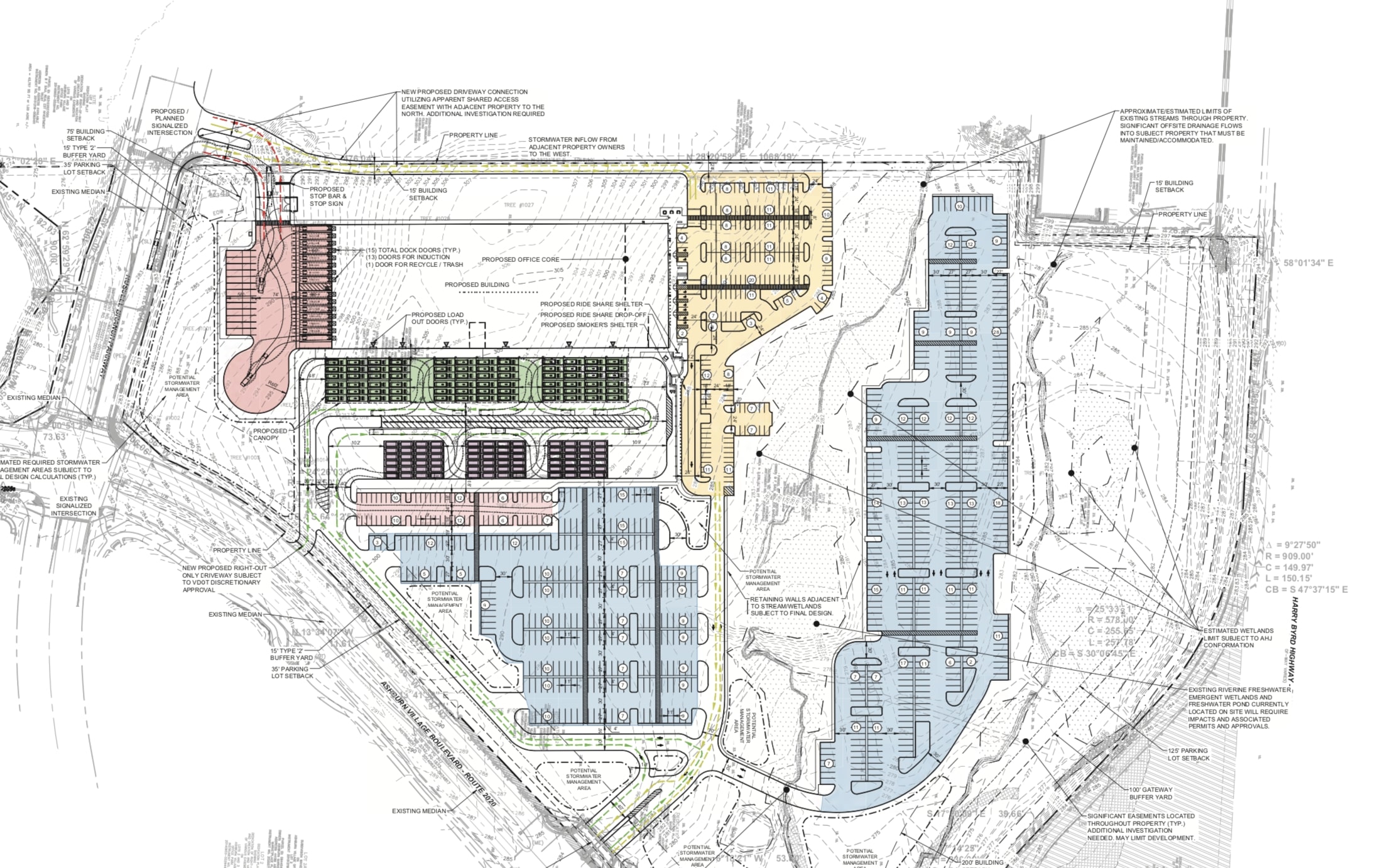 It’s been a while since we had a good mystery here at The Burn, but the unnamed company behind a large delivery facility proposed for a prominent Ashburn intersection has folks wondering (and by folks, we mean us). Could it possibly be a new Amazon delivery center?

According to the filing, the purpose is “to operate a 142,796 (gross square foot) e-commerce parcel delivery station with 1,480 daily trips, primarily consisting of passenger vehicles, but including 42 tractor-trailer truck trips and 460 delivery van trips a day.”

It has been well reported that Amazon is currently building a string of small warehouses around the country — what they call “last mile delivery stations.” Packages are sent to delivery stations from nearby Amazon fulfillment centers, then loaded into trucks and vans for final delivery to area customers. Could this new project be one of these “last mile” centers?

There is no brand name associated with the “delivery station” in the documents. The paperwork has been filed by a Florida-based consulting firm called NV5. NV5 has done traffic study work for Amazon in the past. Does that mean this is definitely an Amazon project? No.

Reports about other Amazon delivery centers plans describe how they intentionally schedule their drivers to minimize vehicles coming and going during peak traffic hours — specifically morning and afternoon commute times. Tellingly, the documents filed with Loudoun County last week include a similar schedule, showing how the center will reduce its vehicle traffic during morning and afternoon commute times.

The Burn reached out to Amazon for comment and received the following statement: “Amazon is a dynamic business and we are constantly exploring new locations. We weigh a variety of factors when deciding where to develop future sites to best serve customers, however, we have a policy of not commenting on speculation or our future roadmap.”

The property is currently owned by the BF Saul Real Estate Investment Trust. There has long been interest in building high-density residential housing on that plot of land. There is an active rezoning application on file with the county dating back to 2016, proposing to build apartments or residential units. The parcel is currently zoned for light industrial, meaning the delivery center wouldn’t likely need any rezoning. It would be what is known as a “by right” development.

We have messages in to the property owners and other parties. We’ll continue to dig for more information on this project and who might be behind it. Whether it’s Amazon or some other delivery service, if it comes to fruition, it will be a noteworthy development due to its location at a major intersection in Ashburn.

One interesting side note — we’ve heard from several sources that this is the last undeveloped parcel in the Ashburn Village neighborhood that started way back in the 1980s. If that’s accurate, it’s an interesting historical footnote to this latest development story.