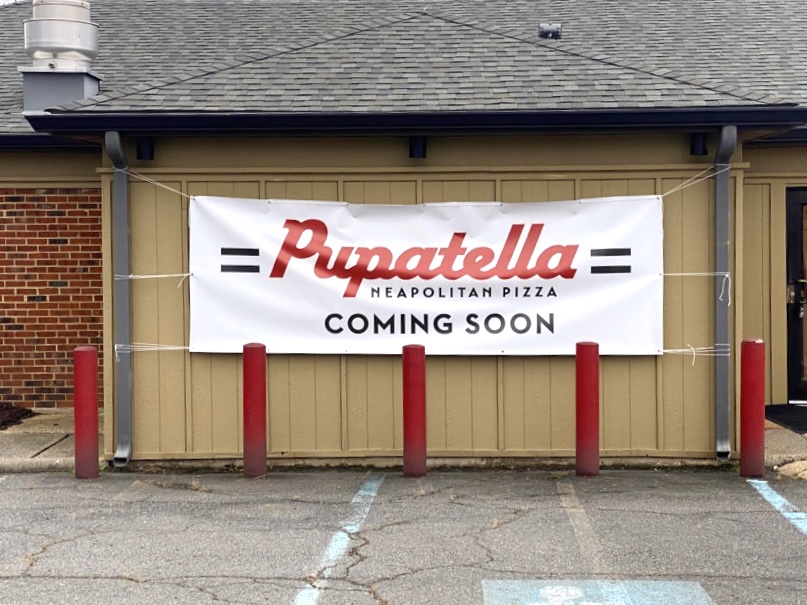 People driving or walking down East Market Street in Leesburg might spot a new banner hanging on the side of an empty building. It’s the first tangible sign at the future site of Loudoun County’s first Pupatella Neapolitan Pizza restaurant.

The Burn broke the news back in October that Pupatella was headed to Leesburg. The popular regional brand is taking over the former Pizza Hut building at 350 East Market.

It’s at least the second Pupatella to repurpose a Pizza Hut building with its familiar mansard roof. The Reston location is also in a former Hut.

The Pupatella team hung a new “Coming Soon” banner on the side of the building on Tuesday. No sooner had the sign gone up than a FOB (friend of The Burn) snapped a photo and sent it to us.

We reached out to Michael Berger, the COO of Pupatella and one of the brand’s partners, who said they hope to start the permitting and construction process in early 2022, with a target opening this coming summer.

Pupatella specializes in the style of pizza made famous in Naples, Italy. The 900-degree wood-burning ovens are imported from Italy and the restaurant’s pizza makers have to undergo specialized training in crafting Neapolitan pizzas.

Traffic back ups reported on Sycolin due to Covid testing event

Cook Out gets closer to NoVa as Winchester location opens