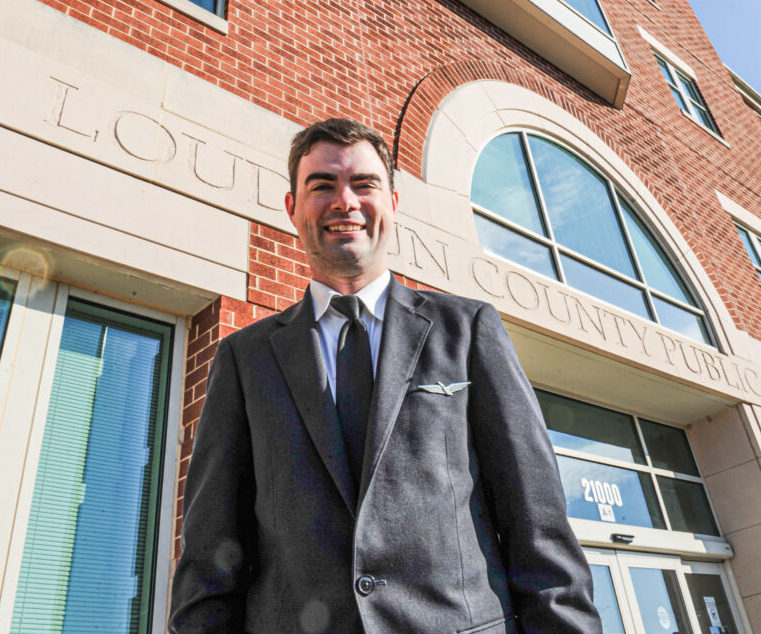 Technically, Andrew Hoyler is a politician. He was a candidate for the Loudoun County School Board in 2020, lost that election, and then due to a bittersweet twist of fate, found himself on the board on which he has long wanted to serve.

But Hoyler is also more than just a politician. He’s a local man — raised in The Broadlands. He attended Loudoun public schools, graduating from Briar Woods High School in 2014. From there he went to Purdue University and earned a bachelor’s degree in professional flight.

Today, Hoyler is 25 and a commercial airline pilot. Between flying all over the country, he’s finding his way around being a School Board member. He was appointed to the board in October to represent the Broad Run District after the previous board member, Leslee King, passed away.

His appointment came at perhaps the most challenging moment in Loudoun school history since desegregation — as mask mandates, fights about critical race theory and reports of sexual assualts in schools have rocked the district and the School Board and drawn national media attention.

Ashburn Magazine spoke with Hoyler about his life, his background and how he developed a passion for education at such a young age.

“My interest in running for the school board started in 2018, when I began to reflect on my time as a student in Loudoun County public schools. Being that I still had three siblings in our schools, I recognized a need for me to speak up and bring my own perspectives and experiences to ensure that my siblings, and others, did not have to go through the same negative events that I did.

“I thought that the perspective of someone who had recently been through our system would be a good one to have on the board. I am the only board member at the moment who was ever a student in LCPS — a view that I think is extremely valuable.

Click here to read the rest of the story at the Ashburn Magazine website, including how bullying drove Hoyler to consider suicide as a young teen, how his love of travel led him to become an airline pilot, and what it’s like being in the middle of the storm that has surrounded the Loudoun County School Board.

New golf simulator center with a bar opening in Leesburg

Mochinut opens its doors at the Village at Leesburg