In these challenging times, we are going to continue our practice of sharing unique and interesting local stories from our partner publication, Ashburn Magazine.

Every month, thousands of Ashburn residents pour through the doors of Clyde’s Willow Creek Farm, the area’s original elegant, upscale dining destination. Some head to one of the many dining rooms for lunch or dinner with their families. Others head to any of four bars on the property, where they relax and unwind over wine and whiskey with friends.

In all the repasting and reveling, they often give the unique décor and history of the space little more than a passing glance. Sure, it looks like a quaint old inn. But lots of restaurants have a similar theme in history-rich Northern Virginia. 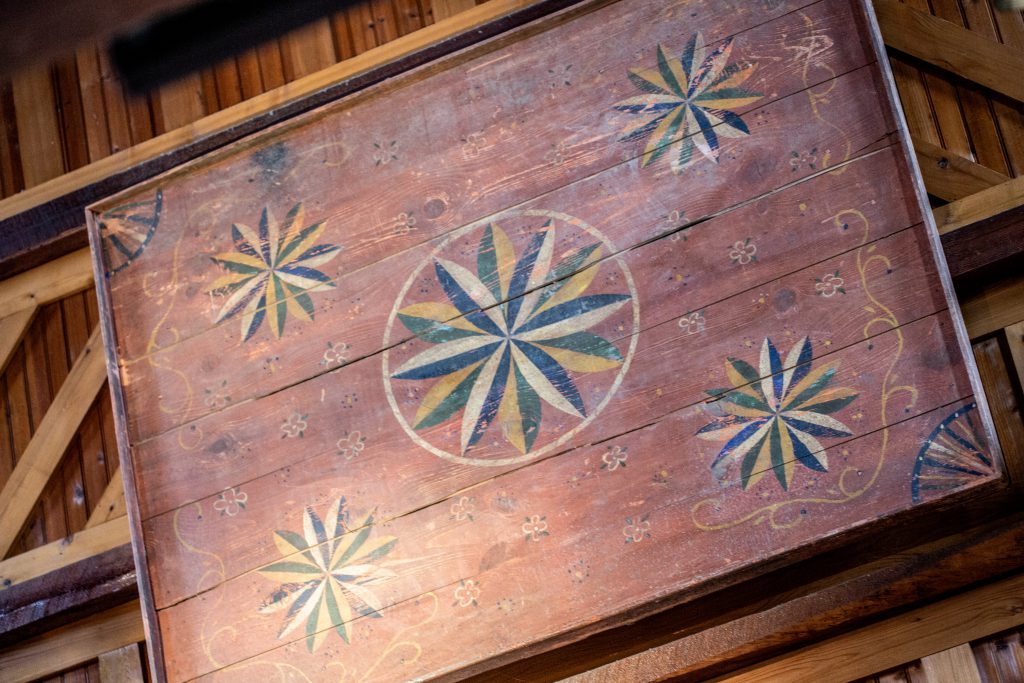 And so it goes. Four separate historic buildings, saved from the wrecking ball in the 1980s, taken apart and stored for years with great care, then transported hundreds of miles, and reconstructed in the (then) farmlands of Loudoun County. Add in hundreds and hundreds of real antiques collected around the region, plus skilled artists recreating lost traditions, and you have a property that deserves more than that passing glance.

Ashburn Magazine took a tour of Clyde’s Willow Creek Farm with Tom Meyer, president of Clyde’s Restaurant Group, and the longtime history buff shared some amazing secrets with us.

As you enter the restaurant through the main front door, you are stepping back in time, into what was once the Samuel French Tavern in Vermont. It was built in 1804 and expanded in 1821. The original structure goes roughly from the hostess stand to the entrance into the main bar and includes the stairway up to several small private party rooms on the second floor.

Much of the woodworking is original to the inn, including the wainscoting on the walls and chair rail trim. In places where materials had been damaged, Clyde’s hired craftsmen to recreate the exact pieces so the eye can’t tell any difference.

“It was really John Laytham,” said Meyer. “He had a passion for preserving these old structures.” Laytham, who passed away in 2019, was one of the co-owners of Clyde’s, having started there as a dishwasher in the 1960s. He helped build the Clyde’s brand into a multimillion-dollar restaurant business and saw the nascent community of Ashburn as the perfect spot for the company’s history-laden new location.

“Here we are in this brand new community, everything is vinyl siding and all these brand new homes, and we just thought people would really enjoy something that felt old and authentic,” Meyer explained. 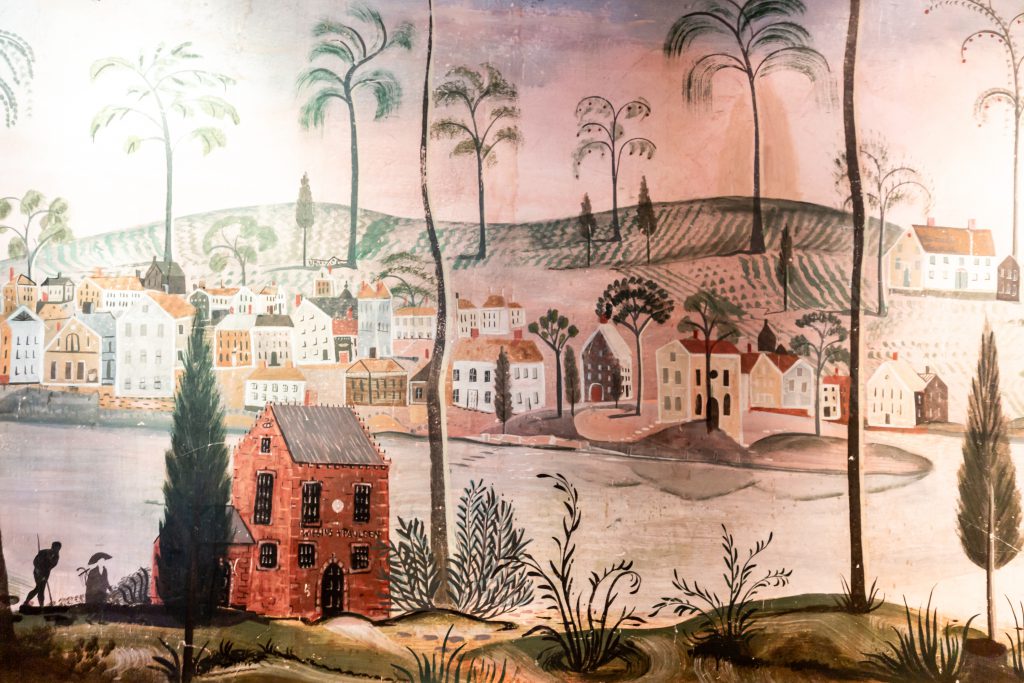 On the walls of the lobby and other rooms are old-timey murals depicting rural life several hundred years ago. No, these murals aren’t original, but the restaurant hired artists who could paint in a particular style known as “itinerant art.” In the old days, artists would wander the countryside, stopping at homes and taverns and offer to paint in return for some food and a bed for the night. Clyde’s purposely recreated this “itinerant” style on many of the walls in the restaurant.

Right behind the “inn” sits the Roxbury House from 1810, also from Vermont. The long building makes up the two dining rooms as you walk down the long central hallway of Clyde’s. Note the massive timbers that form the skeletons of the rooms. They were cut before the days of powered saws, instead hand hewn with axes and chisels. A fireplace and chimney once stood in the center of the first dining room, and the wooden beams above it are darker, possibly stained by the smoke.

These dining rooms have cabinets on the back wall, painted in a pale, ethereal color. In most cases, this is the original milk paint finish on them. Milk paint is a gentle paint often made of milk and lime with pigments added for color. It has been used for thousands of years. “It was considered fancy in its day,” Meyer said. 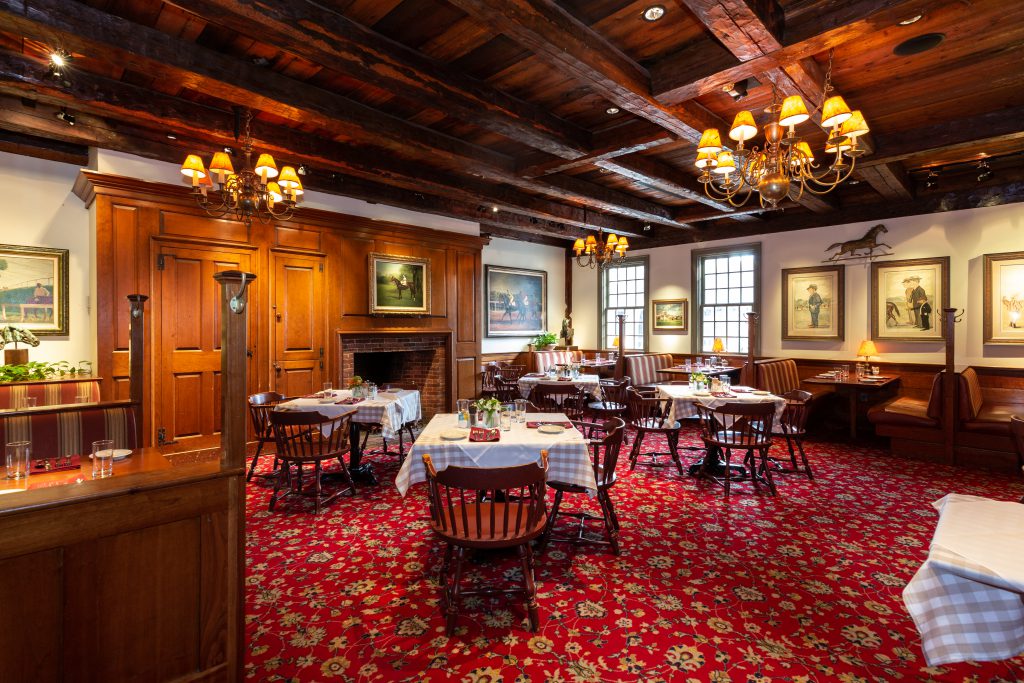 At the rear of Clyde’s, you reach the huge Chandler Barn. Standing outside the entrance is a horse (fake) and carriage (real). The horse once stood at the famed 21 Club in New York City where it was the speakeasy’s mascot. The carriage dates to the pre-automobile era and was bought at an auction in Hershey, Penn.

This innocent diorama is the scene of perhaps the most shocking secret from Clyde’s. On opening night — Dec. 1, 2006 — the restaurant was crowded with diners. Staff members noticed that the carriage, with its curtained windows, was rocking back and forth. When they opened the door, they found two party-goers inside in the middle of — how shall we say this delicately — making “sweet amour.” 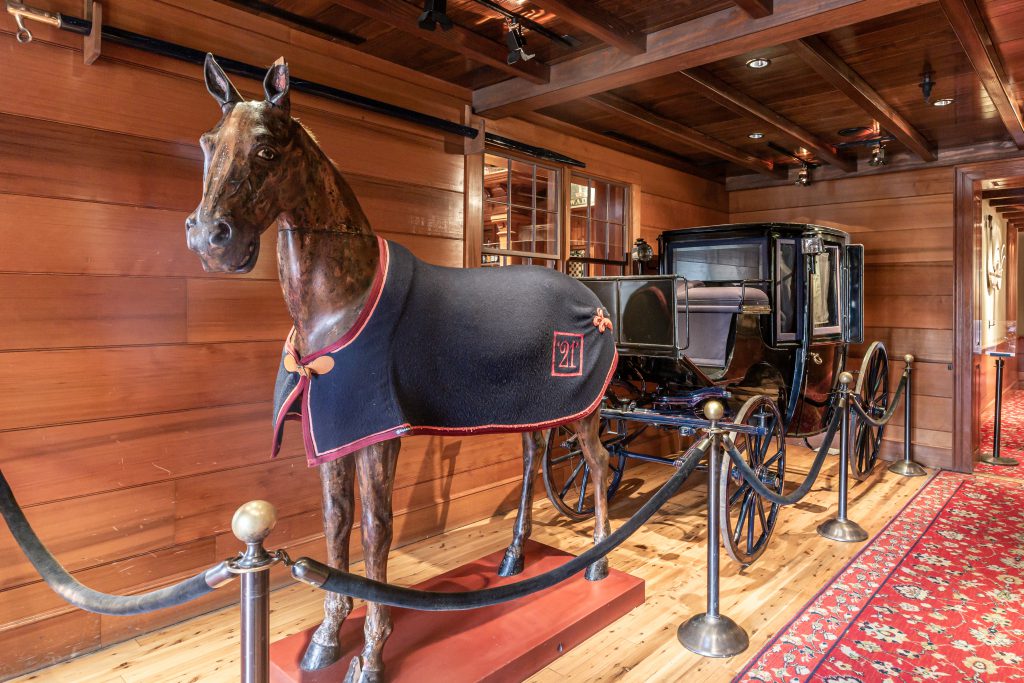 To learn more about the many secrets hidden in plain sight at Clyde’s Willow Creek Farm, you can read the rest of this article over at the Ashburn Magazine website by clicking here.

Jeff Kinney, author of the "Diary of a Wimpy Kid" series, has a brother who

Old Glory DC will begin playing in Loudoun County in 2021.