In these challenging times, we continue our practice of sharing unique and interesting local stories from our partner publication, Ashburn Magazine. *Note: Undoubtedly the current health crisis has put these concerts on hold for the time being.

One Saturday evening each month, near the end of a winding cul-de-sac in the Broadlands, a two-story, single-family house that otherwise blends into its suburban surroundings transforms into a bustling concert venue. Music fans, many of whom have never met this homeowner, stream up the stone walkway, past the collection of garden gnomes and through the wooden front door, marked with a welcoming note, “Come on in!”

Inside, they find instruments and a small sound system set up, a sofa and chairs arranged in quarter-circle rows to accommodate spectators. Some knowing visitors will head up the stairs to the half-dozen seats in the “balcony”  — the railing-lined second-floor hallway that looks out over this great room. 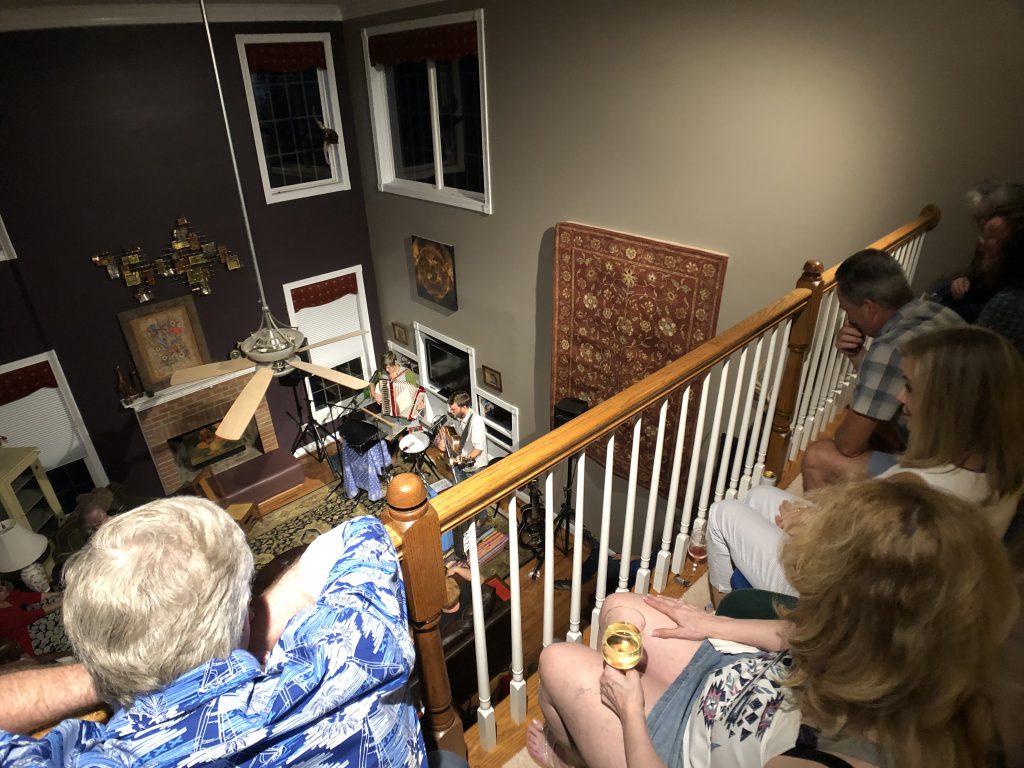 In Ashburn, a community not known for dedicated live music venues, Carrie McCauley, 58, decided to make one of her own.

“To go out to listen to music [in other parts of the Washington area] — it used to be one of my big things that I’d like to do. But now I get aggravated because the sound system is lousy, or somebody is having an obnoxious conversation and it’s like, why do I bother going out?” she said. “I might as well just stay home and listen to music.”

So, McCauley and her husband, Ken, invite the artists to come to them. And they attract crowds of about 30 people, who find their home concert series — called Music on the Heights —through a Facebook page and the event website Meetup. In addition to enjoying a night of live music, guests can help themselves to sandwiches, snacks, beer and wine — a hearty spread set up in the dining room. In the kitchen, a small group of friends sometimes makes s’mores. 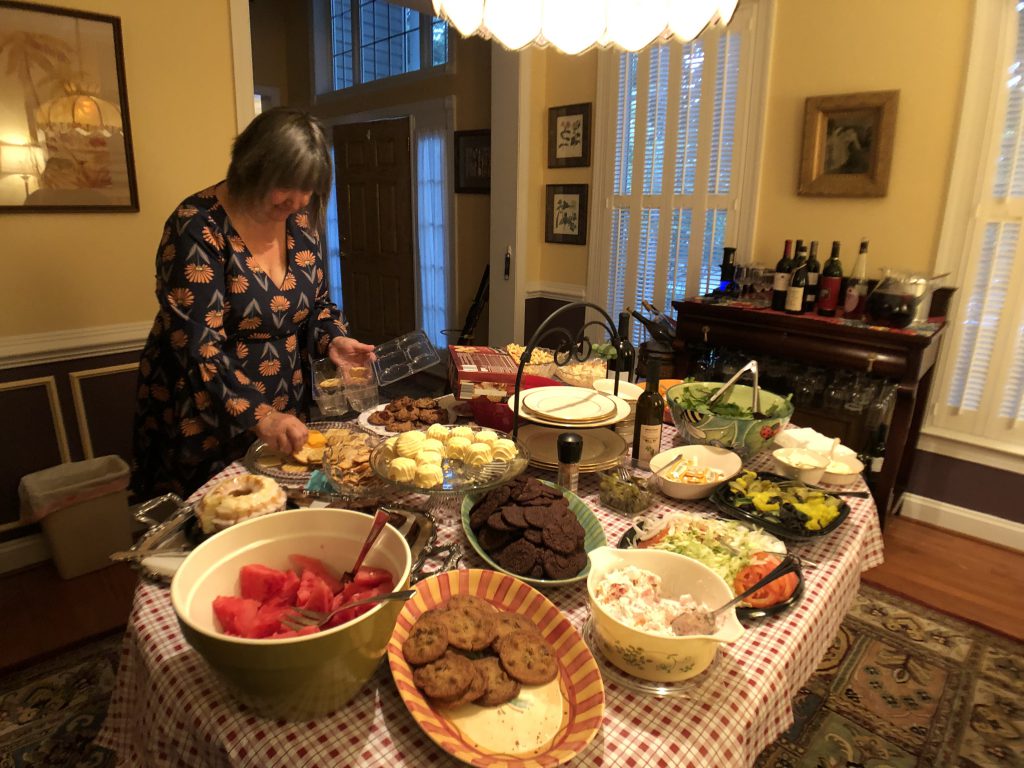 At one recent Music on the Heights event, Nashville duo The Rough & Tumble delighted the crowd with folksy Americana music and humorous tales from the road. Mallory Graham and Scott Tyler have been on this trek back and forth across the United States since 2014, after a bad experience with a landlord forced the realization that a touring band really needs no permanent place of residence. The road could be home. And so, they travel from show to show in a camper that also houses their two large mastiff dogs — “Sixteen feet and feeling smaller by the day,” Graham said.

About a third of their 150 shows per year are in people’s homes, a circuit of intimate concerts that has blossomed recently.

“People are there to listen,” Graham said. Contrast that with McCauley’s complaint about going to bar shows, with all the “obnoxious conversation.”

Go see a band at a club, and you could easily find yourself standing in front of a group of bloviating bros. McCauley’s house is a social event where people mingle, sure – “It is a way of connecting people; music is a common denominator for a lot of folks,” she said — but when the music starts, the chatter stops and people pay attention to the performers.

That atmosphere is a key attraction, said Marge Niedzwicz, a former Ashburn resident who now drives to Music on the Heights from Alexandria every month. “They have so many people who actually want to come to this, and this is all through Meetup originally, and word of mouth just spreads. Everybody enjoys themselves because it’s just so homey and comfortable.”

McCauley, for her part, says she’s never been concerned about welcoming fellow music fans, even those she hasn’t met, into her home. “Ken and I are pretty open people,” she said. “I don’t want to say we collect all the stray dogs in the neighborhood, but we’ve always had a welcoming attitude towards folks. My fundamental belief is that people are good.”

That feeling of kinship, coupled with the intimate setting of seeing a live performer while seated on an easy chair 20 feet away, is partly what’s fueling a house concert trend across America. That and the ability for artists to link up with hosts, and hosts to connect with audiences, via the internet. 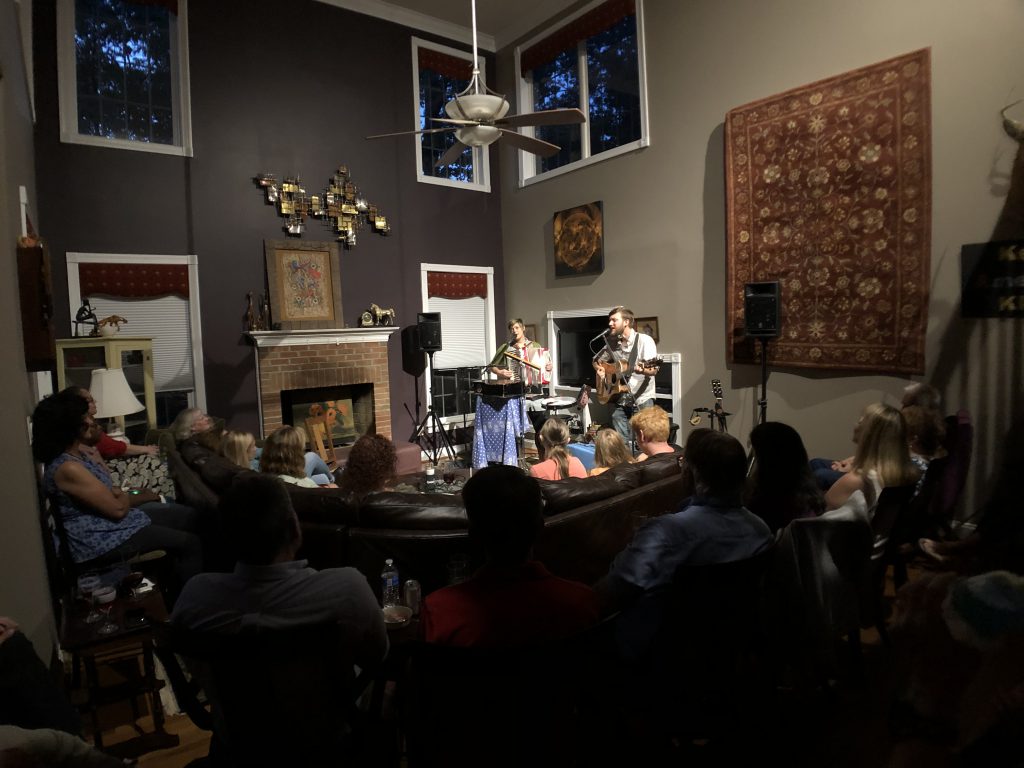 Paul Price is the founder of UndiscoveredMusic.net, a website that fosters such connections with a database that lists more than 700 homes across the country where concerts are held (plus hundreds of other non-traditional venues). McCauley says she uses Price’s website and another, ConcertsInYourHome.org, to find artists willing to perform at Music on the Heights.

Price, who hosts his own house concerts in Georgia, says homeowners open their doors purely for the love of music. “We are definitely not in it for the money,” he said. “I’d say we’re out a couple hundred dollars every time we throw one of these.”

To keep things legal, homeowners typically can’t charge admission to shows (see sidebar), but the bands do get paid via the kindness of strangers. At Music on the Heights, McCauley verbally nudges people toward the donation jar, and the band leaves with all the collections. At the Rough & Tumble show, the band also set up a merchandise table and sold copies of their CDs as well as t-shirts, stickers and other memorabilia. Price says this is a good deal for artists.

To read the rest of the article about Music on the Heights, including how much money the bands make, what happened the time just three audience members showed up plus the answer to the question, “Is it legal?” — head over to the Ashburn Magazine website here.

Next Post
Work on new Leesburg shopping center gets underway