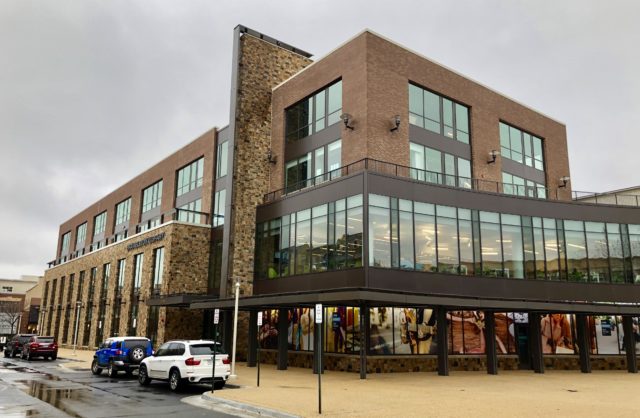 Sure the Ashburn Library off Hay Road is nice, but it’s going to look downright quaint when compared to the new Brambleton Library opening this Saturday in the Brambleton Town Center. The Burn was given a sneak peek tour today and we saw some amazing things.

The new library is immense — 40,000 s.f. and two-stories tall, featuring books galore, including the first collection of Tamil language books at a Virginia public library.

There’s also much more than just books. There is a “Makerspace” where kids and adults can use 3D printers. During the tour, the twin devices were turning rolls of plastic string into bookmarks.

There is also heat press equipment for making t-shirts, embroidery equipment and sewing machines, a laminator, even a kiln for firing pottery. There is also a professional recording studio in the works where visitors can record music, podcasts and more.

A huge stairwell doubles as a stadium seating, where guests can gather for a music performance or watch a movie on a screen that lowers from the ceiling.

By far the coolest thing were saw is also one of the most mundane — the book return. Like other branches in Loudoun County, people returning library books slip them into a machine where they are sucked away to be re-shelved. But at the Brambleton Library, they have put big glass walls around the return center, so you can watch your book as it slides in on the conveyor belt, its barcode is read, and then more conveyors transport it and dump it into the appropriate bin. Trust us, kids are going to want to check out books just so they can return them.

The ribbon cutting takes place this Saturday, Dec. 1, at 1 p.m. and then the doors will open to the public. The Brambleton Library is open seven days a week — Monday through Saturday 10 a.m. to 9 p.m., Sundays from 1 to 5 p.m.

For more images, check out our previous story about the new library here.