The new pizza place is just south of Ashburn at the mammoth Dulles Landing shopping center. 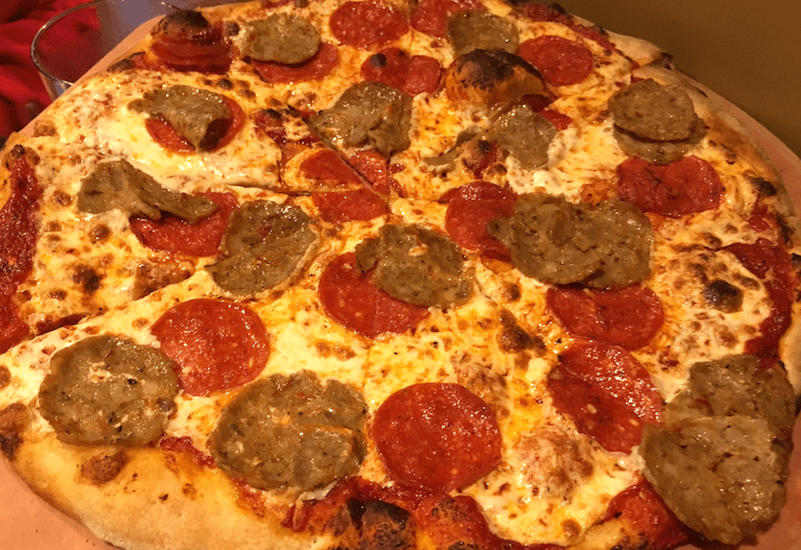 Last night, the restaurant had a sneak preview event and we got to check out the Coal Fire experience. It’s a sit-down, full-service restaurant with a long bar and a variety of beers on tap. As customers walk to their tables, they can see into the pizza prep area where dough is being stretched and tossed and pizzas are baking in the large oven.

The menu focuses on pizza, of course. It’s a very thin crust style and comes in 12-inch or 16-inch sizes. (They have a 9-inch size available during the lunch hour as well.) Customers choose between a traditional sauce, a signature sauce (sweet and spicy) and a spicy sauce. They also have chef-designed pizzas as well as an extensive menu of salads, wings, pastas and heavy duty sandwiches such as beef brisket or homemade meatballs smothers in cheese.

The Burn tried the Traditional Wings, which are seasoned and baked rather than fried. They’re served withs sautéed Vidalia onions and had a great flavor. For our pizzas, we got a pepperoni and sausage with the spicy sauce and a white pizza with sliced tomatoes. Both were delicious with just the right amount of light char on the bottom. And when they say thin crust, trust us — they mean thin crust.

It’s a short drive to Coal Fire for most of Ashburn. The Dulles Landing shopping center is about 8-10 minutes south of Brambleton just off Loudoun County Parkway. (It will be even faster when the LoCo Parkway connection goes through.)

The Dulles Landing location is one of two new Coal Fire Pizzas opening in Loudoun. The other is under construction at the Cascades Overlook center in Sterling. It tentatively should open sometime in late June or July.